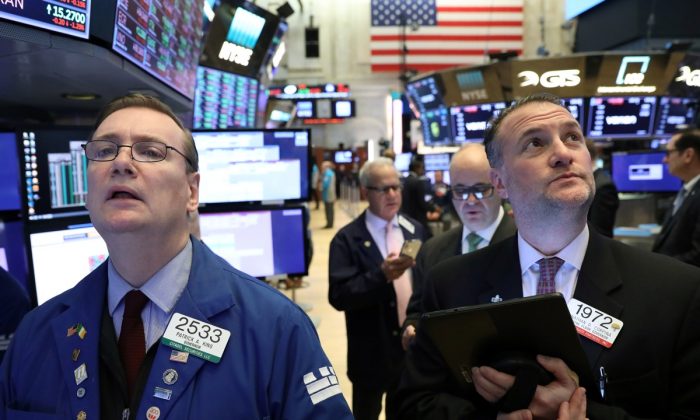 Traders work on the floor of the New York Stock Exchange (NYSE) in N.Y. on Feb. 4, 2019. (Brendan McDermid/Reuters)
US News

The slump in videogame stocks contributed to a 1.5 percent decline in the S&P 500 communication services sector, the largest drop among the S&P’s major sectors.

Despite the fall, Wall Street’s indexes remained near two-month highs. A 7.3 percent gain in the S&P 500 would put the index above its record closing September high.

“The market is feeling a little exhausted after we’ve had a nice run in January and early February,” said Nathan Thooft, global head of asset allocation at Manulife Asset Management in Boston.

Investors cited a void of catalysts for market gains.

“Trade talks are probably the thing that’s really intriguing to the market, but that’s in March,” said Kim Forrest, senior portfolio manager at Fort Pitt Capital Group in Pittsburgh, referring to the deadline for the United States and China to reach a trade agreement before additional tariffs go into effect.

Shares of Snap Inc rose 26 percent on Feb. 6, after the maker of Snapchat messaging app arrested a fall in users on Apple devices and drew a series of favorable reviews from analysts for its progress with a new Android app.

Snap faced criticism last year for a botched-up redesign of its messaging app and millions of users left the platform. Users peaked at 191 million in the first quarter of last year.

The company reported 186 million daily active users at the end of December, steady compared to three months earlier and beating Wall Street expectations of $184.91 million. It said it expects no decline in users in the first quarter of this year.

“We are taking comfort in the iOS user stabilization, (but) the more important product development for us will be the release of the Android app to help reignite user growth,” Credit Suisse analysts wrote in a note.

At least 11 brokerages raised their price targets on the stock.

The targeting of Android users is a change of tune for Chief Executive Officer Evan Spiegel, who prioritized development on the Apple ecosystem through its stock market launch in 2017.

Analysts said that if Snap can repair the reputation of the Android app on what is now the world’s main mobile operating platform, its user growth may return.

Jefferies analysts said, “2018 was the year of exodus from both employees and users on the platform, but we believe that Snap is turning the corner in ’19 and that will help investor sentiment improve throughout the year.”

However, several analysts said they would wait for further signs of improvement in Snap’s business before calling it a turnaround story.

U.S. Treasury Secretary Steven Mnuchin said trade talks with China last week were “very productive” and confirmed that he and other officials will travel to Beijing for the next round of meetings.

Though the major indices drooped, the Philadelphia SE Semiconductor Index advanced 2.6 percent. Shares of Apple supplier Skyworks Solutions Inc jumped 11.5 percent after the company announced $2 billion in stock buybacks, while shares of Microchip Technology rose 7.3 percent after the company suggested the chipmaker industry was close to recovery from its recent downturn.

Declining issues outnumbered advancing ones on the NYSE by a 1.50-to-1 ratio; on the Nasdaq, a 1.09-to-1 ratio favored decliners.

Volume on U.S. exchanges was 6.70 billion shares, compared to the 7.50 billion average over the last 20 trading days.

By April Joyner and Supantha Mukherjee