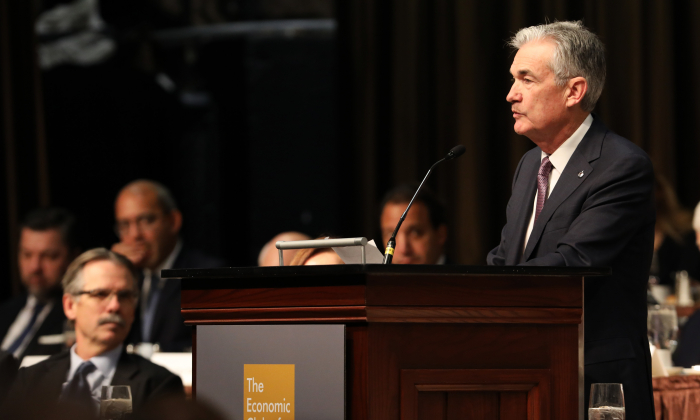 NEW YORK–Wall Street extended its gains on Nov. 28 after Federal Reserve Chairman Jerome Powell said the central bank’s policy rate was “just below” neutral, hinting at a potential moderation in the pace of policy tightening.

Stocks and interest-rate futures jumped in response. The comments were a reversal from early last month, when Powell had said rates were probably still a “long way” from a so-called neutral level and the Fed may even go beyond that level. Those remarks sent stocks down as investors bet the Fed would need more rate hikes to prevent the economy from overheating.

The S&P 500 was up 1.9 percent, while the Dow and Nasdaq each advanced more than 2 percent following the chairman’s speech to the Economic Club of New York. Of the 11 major sectors in the S&P 500, all but utilities were positive. Technology, consumer discretionary healthcare, and industrials were the biggest percentage gainers, each up more than 2 percent.

Powell’s shift in language came as U.S. President Donald Trump stepped up attacks on Powell for rate hikes Trump sees as undercutting his economic and trade policies, telling the Washington Post just yesterday that he is “not even a little bit happy” with the Fed chairman.

Powell “gave the market, and presumably President Trump, exactly what he wanted, which was an admission that the previously proposed path of future rate hikes was probably too aggressive and opening to slowing the rate of hikes,” said Oliver Pursche, vice chairman and chief market strategist at Bruderman Asset Management in New York.

The Fed has settled into a quarterly rate-hike cycle and is expected to tighten policy again next month. But signs of a slowdown overseas and nearly two months of market volatility—including a sharp selloff last week—have clouded an otherwise mostly rosy picture in which the U.S. economy is growing well above potential and unemployment is the lowest since the 1960s.

Powell said the Fed is paying “very close” attention to economic data even as it expects continued “solid” growth, low unemployment, and inflation near its 2-percent target.

The Fed takes equally seriously the risks of hiking too quickly and shortening the economic expansion, and on the other hand, hiking too slowly and prompting higher inflation or financial instability.

“We know that things often turn out to be quite different from even the most careful forecasts,” Powell said at an Economic Club of New York luncheon. “Our gradual pace of raising interest rates has been an exercise in balancing risks.”

Factually, Powell’s remarks on Nov. 28 and in October are both true. The benchmark fed funds rate, at 2.00–2.25 percent, is within a quarter of a percentage point of the bottom of the Fed’s estimated range for neutral, but is also several quarter-point rate hikes below the mid-point estimate of 3 percent.

But markets were focused less on such subtleties than on what Powell’s assessment of where rates are means for the future path of rate hikes.

The contract’s price was last up 4.5 basis points to the highest since early September and carried an implied yield of 2.70 percent. Earlier this month, that contract’s implied yield was a full quarter point higher at 2.95 percent, indicating that investors have now cut a full Fed rate hike from their expectations for the central bank’s policy trajectory.

Earlier in the day, in its first-ever financial stability report, the Fed cautioned that trade tensions, Brexit, and troubled emerging markets could rock a U.S. financial system where asset prices are “elevated.”