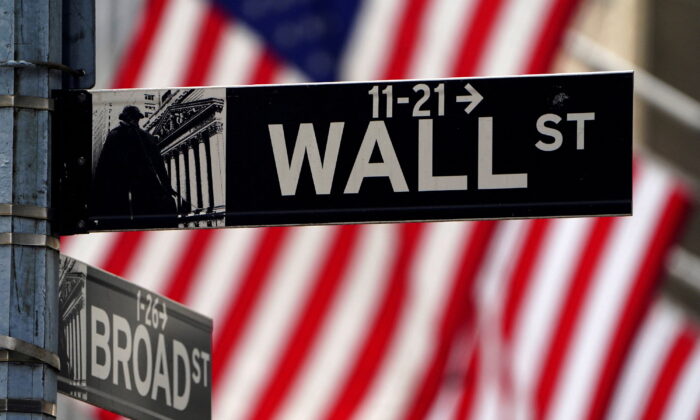 A Wall Street sign outside the New York Stock Exchange in the Manhattan borough of New York, on April 16, 2021. (Carlo Allegri/Reuters)
Stocks

NEW YORK—Wall Street closed sharply higher on Friday as signs of peaking inflation and consumer resiliency sent investors into the long holiday weekend with growing optimism that the Federal Reserve will be able to tighten monetary policy without tipping the economy into recession.

The S&P and the Nasdaq suffered seven consecutive weekly declines, the longest since the end of the dot-com bust, while the blue-chip Dow’s eight-week selloff was its longest since 1932.

“The market has now discounted a lot of the negative news, a lot (of which) hit all at once,” said Keith Buchanan, portfolio manager at GLOBALT in Atlanta. “Now we have absorbed that news and the actions the Fed is going to take, and we’re wrapping up earnings season.”

“The signs are lining up and the boxes are being checked that we expect to develop when the market starts to form a bottom,” Buchanan added.

During the S&P’s seven straight weeks of losses, from its April 1 to May 20 Friday closes, the bellwether index shed 14.2 percent of its value and threatened to confirm it has been in a bear market since its Jan. 3 record closing high.

But this week, in a sharp reversal, the S&P reclaimed much of that lost ground by soaring 6.6 percent, its best week since November 2020.

“It was inevitable that the losing streak would end,” said Tim Ghriskey, senior portfolio strategist Ingalls & Snyder in New York. “Corrections and bear markets are followed by ‘up’ markets.”

Generally upbeat earnings guidance and solid economic indicators have fueled hopes that the Fed’s hawkish maneuvers to contain decades-high inflation will not cool the economy into contraction.

Data released on Friday showed better-than-expected consumer spending and appeared to confirm that inflation, which has dampened corporate earnings guidance and weighed on investor sentiment, has peaked.

This, combined with the minutes from the central bank’s most recent policy meeting, which reaffirmed its commitment to rein in spiking prices while remaining responsive to economic data, helped boost risk appetite.

All 11 major sectors of the S&P 500 advanced amid light trading, with consumer discretionary, tech, and real estate notching the biggest percentage gains.

First-quarter earnings season is largely in the bag, with 488 of the companies in the S&P 500 having reported. Of those, 77 percent have beaten consensus expectations, according to Refinitiv.

Trading volumes were light ahead of the long weekend, with U.S. stock markets closed on Monday in observance of Memorial Day.

Volume on U.S. exchanges was 10.92 billion shares, compared with the 13.13 billion average over the last 20 trading days.

Advancing issues outnumbered declining ones on the NYSE by a 6.49-to-1 ratio; on Nasdaq, a 4.13-to-1 ratio favored advancers.