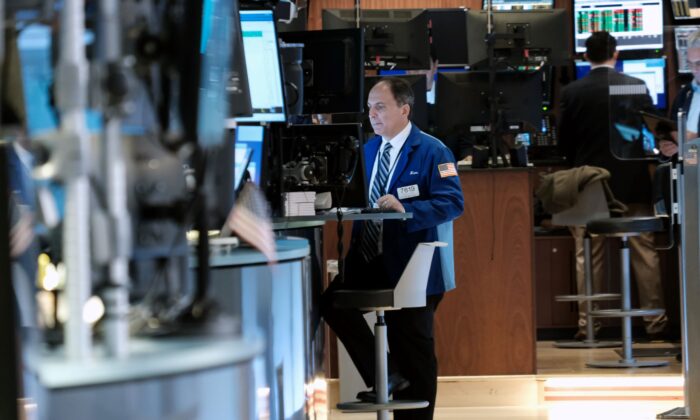 A trader works on the floor of the New York Stock Exchange (NYSE) in New York City on Oct. 25, 2021. (Spencer Platt/Getty Images)
Markets

The Nasdaq led gains among Wall Street indexes on Wednesday after a robust forecast from Microsoft supported optimism about the third-quarter earnings season, while a decline in oil prices hurt shares of energy companies.

The S&P 500 index and the Dow Jones Industrial Average struggled for direction in the first hour of trading, with seven of the 11 major S&P 500 sectoral indexes falling.

Microsoft Corp. jumped 3.6 percent after it forecast a strong end to the calendar year, helped by its booming cloud business. Google-owner Alphabet Inc. gained 3.3 percent after reporting a record quarterly profit on a surge in ad sales.

Their shares, coupled with other mega-cap growth names Amazon.com, and Tesla Inc., provided the biggest boost to the Nasdaq index.

“Today feels exactly like the calm before the storm ahead of a pile of earnings that is due tomorrow and everyone wants to know how the supply-chain issues are going to work out,” said Dennis Dick, a trader at Bright Trading LLC.

Worries over rising prices, potentially higher corporate taxes, and the Federal Reserve’s tapering plans had rattled markets last month, but upbeat earnings reports have reinforced sentiment in October, helping drive the S&P 500 and the Dow to all-time highs this week.

As of Tuesday, profits for S&P 500 companies are expected to grow 35.6 percent year-on-year in the third quarter. Out of the 144 Of companies that have reported earnings, 81.9 percent reported above analyst expectations, according to Refinitiv IBES data.

Major lenders such as Bank of America Corp. and JPMorgan slipped on a flattening U.S. yield curve.

“Taxing unrealized gains is a spooky thing. We have a government that is not scared to tax and that effectively affects investor sentiment,” said Dick.

Texas Instruments Inc. fell 6.0 percent after it forecast tepid quarterly revenue as the chipmaker struggles with supply chain constraints in the semiconductor industry.