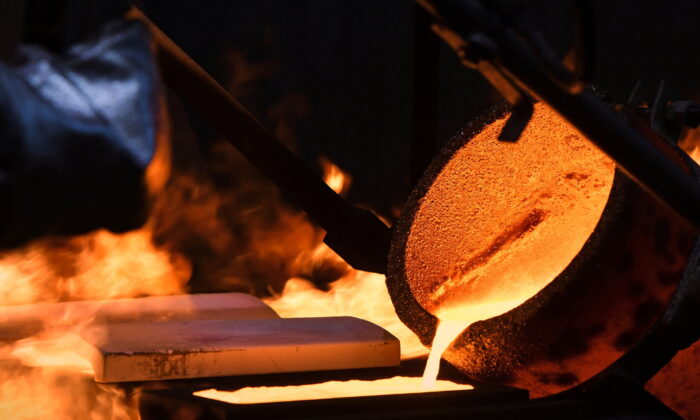 An ingot of 99.99 percent pure gold is cast at the Krastsvetmet non-ferrous metals plant in the Siberian city of Krasnoyarsk, Russia, on March 10, 2022. (Alexander Manzyuk/Reuters)
Commodities

Commodities trading exposures have been going up on Wall Street, following Russia’s invasion of Ukraine, which may leave banking firms vulnerable to large swings in asset values, according to an April 18 story from Reuters.

Goldman Sachs Group (GSG) and JPMorgan Chase have both reported a rise in commodities trading risk measures, according to their first-quarter earnings disclosures, with GSG reporting its highest uptick in a decade.

The global markets for fuel, grain, and precious metals markets have grown more volatile since the West and Japan imposed sanctions on Russia, restricting its trade and exports.

Last month, the London Metal Exchange (LME) suspended nickel trading after prices doubled to more than $100,000 per tonne, after China’s Tsingshan Holding Group, one of the world’s top metals producers, caused a major price surge after it lost billions trying to cover its massive short position in nickel futures.

Wall Street firms have scaled back major trading in commodities after the 2007–09 financial crisis forced Congress to impose tighter regulations, by restricting the ability of American banks to participate through the use of their own assets.

The Federal Reserve pumped liquidity into capital markets during the pandemic, encouraging Wall Street to gradually heavily reinvest in the commodities market.

The central bank’s decision to stimulate the economy pushed asset values higher, triggering massive investor purchases, as the move disrupted the normal workings of the market, causing a windfall for investment banks that dealt with precious commodities.

JPMorgan Chase reported its average daily VaR in commodities at $15 million in Q1 2022, up from $12 million the previous quarter and surpassing its $12 million in equities and $4 million for foreign exchange.

Although the risk caused by commodities trading exposures is rising, the two banks are taking in decent earnings.

Citigroup, which does not report VaR alongside its earnings, disclosed in its latest report that its VaR in commodities was up year-on-year every quarter in 2021, with a peak of $48 million at the end of last year’s second quarter.

Morgan Stanley, which does not break up its VaR by asset class, has not been heavily involved in the commodities trading business since the last financial crisis.

So far, the major banks appear to be handling the increased risks effectively, reported the International Monetary Fund (IMF) in a post on April 6.

“The world’s banking systems saw significant capital increases ahead of the pandemic and are resilient to very large shocks,” said the IMF in an online post.

The post said that the international banking system had largely passed its major milestone for its post-pandemic Global Bank Stress Test, which “provides a first-of-its-kind assessment of potential shocks and spillovers to the world’s banks.”

The IMF Departmental Paper on the global stress test says it includes 25 years of bank-level data through 2020 for 257 of the largest lenders from across 24 advanced economies and five emerging markets, which together account for 70 percent of the world’s banking assets.

“The stress test covers as many institutions as necessary to account for at least 80 percent of assets for the individual banking systems,” for each country monitored.

The report was put together before the conflict in Ukraine, the removal of Russia from international money markets, and more recent concerns regarding global stagflation.

The study is positive that the international banking systems will be able to absorb most shocks from adverse developments to the market like those seen during the pandemic, but it says there are still “uncertainties associated with the evolution of capital levels during 2021 and the policy space to absorb new shocks.”