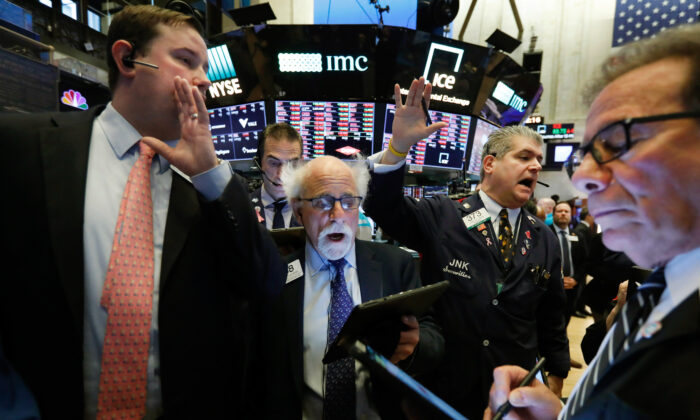 Stocks on the S&P 500 and the Dow closed down on Dec, 30, after giving up its early gains late in the trading session breaking what could have been its longest streak of gains since March.

The market initially rallied after weekly jobless claims fell more than expected, calming fears of the Omicron variant’s effect on the U.S. economy.

A Labor Department’s report (pdf) showed positive unemployment results for the week ending Dec. 25, with the number of Americans filing for new unemployment claims falling to 198,000, from 205,000 a week earlier.

“The labor market is shrugging off the spread of omicron for now. For 5 of the last 6 weeks initial #unemployment claims have been below the pre-pandemic average,” said Mark Riepe, the host of the Financial Decoder at Charles Schwab on Twitter.

The four-week moving average of initial claims, which is often seen by analysts as an indicator of broader labor market trends, fell to their lowest level since 1969.

The lower number of weekly jobless filings is also a fresh sign of a tightening American job market.

The weekly rolling average of new cases has jumped 60 percent from the previous week to about 240,000, according to the CDC on Dec. 29.

Emerging evidence that the Omicron variant may not have as a severe of an effect on the economy, has caused U.S. equities on the market to remain upbeat in volume, but not to the earlier degree prior to the Delta variant.

Investors are already preparing for the first quarter of 2022, when the Federal Reserve is expected to hike U.S. interest rates in the face of rising inflation, global supply chain problems, and the upcoming mid-term elections.

The financial markets are currently in a “Santa Claus Rally” season, a historically strong trading period that typically occurs in the last five trading days of the year into the first two days of the new year.

Meanwhile, stocks of Biogen dropped 8 percent after the South Korean conglomerate Samsung denied a media report that it was not in talks to buy the U.S. drugmaker.

Oil prices went up with West Texas Intermediate crude rising to 0.04 percent to $76.59, with Brent crude, the international benchmark, up 0.11 percent to $79.32 per barrel.

The stock markets will have another round to finish the year on a high note, when Wall Street opens on New Year’s Eve, despite it being a federal holiday.

The Wall Street indexes are looking to exit 2021 on a positive note with their sharpest three-year surge since 1999.