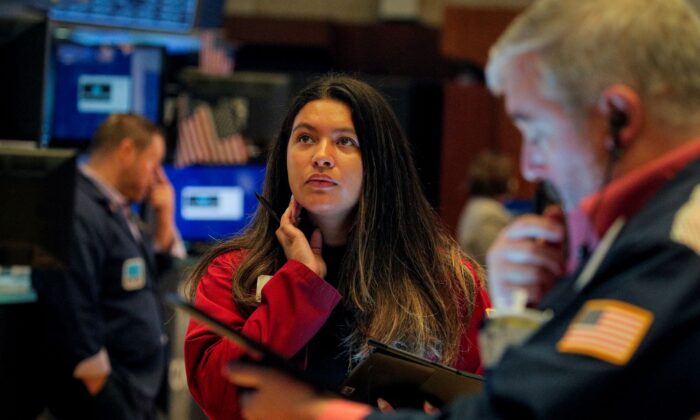 NEW YORK—U.S. stocks rose on Friday and the Dow scored its biggest weekly percentage gain since June, as Goldman Sachs rounded out a week of strong quarterly earnings for the big banks.

Goldman Sachs Group shares jumped 3.8 percent and gave the Dow its biggest boost, as a record wave of dealmaking activity drove a surge in the bank’s quarterly profit.

Goldman’s report followed strong results from Bank of America and others this week. Banks were among the biggest positives for the S&P 500 on the day, and the index’s bank index climbed 2.1 percent.

Results from big financial institutions provided a strong start to third-quarter U.S. earnings, though investors will still watch in coming weeks for signs of impacts from supply chain disruptions and higher costs, especially for energy.

Forecasts now call for third-quarter S&P 500 earnings to show a 32 percent rise from a year ago. The latest forecast, based on results from 41 S&P 500 companies and estimates for the rest, is up from 29.4 percent at the start of October, according to IBES data from Refinitiv.

“We’re starting to get into an earnings-driven rally here that I hope lasts. We’ll really see the results in the next couple of weeks as a great bulk of companies in all sectors report,” said Peter Tuz, president of Chase Investment Counsel in Charlottesville, Virginia.

The Dow jumped 1.6 percent for the week, its biggest weekly percentage gain since June 25. The S&P 500 had its strongest weekly advance since July 23.

The U.S. Commerce Department reported a surprise rise in retail sales in September, although investors still worried that supply constraints could disrupt the holiday shopping season. A preliminary reading for consumer sentiment in October came in slightly below expectations.

On Thursday, Moderna Inc. shares jumped when an FDA panel voted to recommend booster shots of its COVID-19 vaccine for Americans aged 65 and older and high-risk people.

Shares of cryptocurrency and blockchain-related firms gained as bitcoin hit $60,000 for the first time since April. Riot Blockchain ended up 6.6 percent.

Advancing issues outnumbered declining ones on the NYSE by a 1.12-to-1 ratio; on Nasdaq, a 1.24-to-1 ratio favored decliners.

Volume on U.S. exchanges was 9.83 billion shares, compared with the 10.5 billion average for the full session over the last 20 trading days.