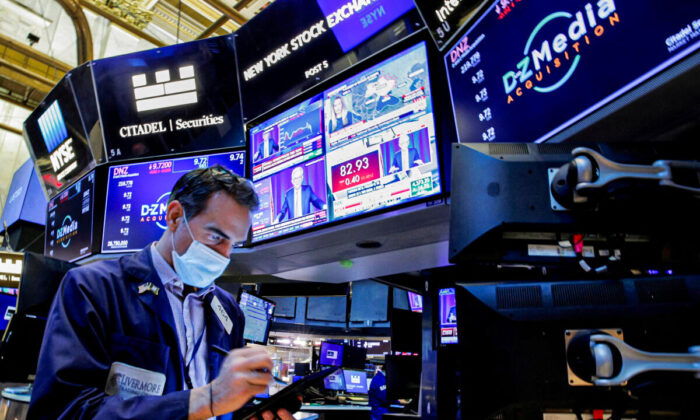 A trader works, as Federal Reserve Chair Jerome Powell is seen delivering remarks on screens, on the floor of the New York Stock Exchange (NYSE) in New York, on Jan. 26, 2022. (Brendan McDermid/Reuters)
Markets

Amazon.com Inc rose 0.2 percent after expanding its market capitalization by around $190 billion on Friday on the back of blowout earnings.

The S&P 500 remains down more than 5 percent so far in 2022, with investors worried that the U.S. Federal Reserve could raise interest rates faster than expected.

“Buying the dip was a foregone conclusion until 2022. There is no more guaranteed buying on the dip,” said Jake Dolllarhide, chief executive officer of Longbow Asset Management in Tulsa, Oklahoma. “We’re seeing corrections in indexes and individual securities on a daily and weekly basis.”

Tyson Foods Inc surged about 17 percent after the meatpacker’s first-quarter profit nearly doubled and surged past estimates on the back of higher prices.

Of 278 companies in the S&P 500 that have posted earnings as of Friday, 78 percent reported above analysts’ expectations, according to Refinitiv data.

An unexpectedly strong jobs report last week added to investors’ concerns about potentially aggressive monetary policy tightening by the Fed. Key inflation data for January is due on Thursday.

Markets are now pricing in a one-in-three chance the Fed might hike by a full 50 basis points in March and the prospect of rates reaching 1.5 percent by year end.

Spirit Airlines Inc jumped 17 percent after it and Frontier Group Holdings unveiled plans to create the fifth-largest U.S. airline in a $2.9 billion tie-up. That lifted the S&P 1500 Airlines Index over 3 percent.

Volume on U.S. exchanges was 10.2 billion shares, compared with a 12.4 billion average over the last 20 trading days.

Advancing issues outnumbered declining ones on the NYSE by a 1.16-to-1 ratio; on Nasdaq, a 1.33-to-1 ratio favored advancers.