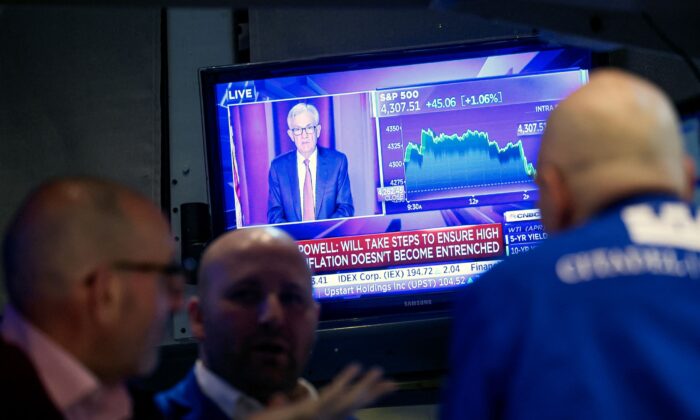 U.S. stocks edged higher on Thursday after a sharp rally in the previous session as the Federal Reserve raised interest rates, while investors closely tracked the Russia-Ukraine peace talks.

Nine of the 11 major S&P sectors rose in early trading, with energy shares gaining 1.7 percent as oil prices hit $105 amid warnings of supply shortages due to a shut-in of Russian oil supplies.

Financials fell the most after rallying sharply in the previous session. The banks index lost 1.4 percent, weighed down by a 2.4 percent fall in Citigroup. The U.S. Treasury yield curve flattened to near two-year lows as investors digested the Fed’s policy decision.

The S&P 500 closed up more than 2 percent on Wednesday, while the tech-heavy Nasdaq rallied almost 4 percent, after the U.S. central bank raised interest rates by 25 basis points as expected and forecast equivalent hikes at every meeting this year.

“At the moment, I would say, investors, are not viewing the Fed’s plan as policy mistake. I think there was consensus. Every month, every meeting, investors are going to re-evaluate. So if inflation does start to cool, investors will expect the Fed to dial back those rate hikes, anticipating them to be kind of data dependent,” said Mike Bailey, director of research at FBB Capital Partners in Bethesda, Maryland.

Signs of progress in talks to end what Russia calls “a special military operation” had helped global stocks surge this week, but the Kremlin said there was no deal yet.

The CBOE volatility index, also known as Wall Street’s fear gauge, rose after closing at its lowest level since Feb. 18 on Wednesday.

Accenture Plc rose 2.3 percent after the IT consulting firm forecast upbeat third-quarter revenue even as it warned of impact to operations if the Russia-Ukraine conflict escalates.

The S&P index recorded 8 new 52-week highs and no new lows, while the Nasdaq recorded 24 new highs and 39 new lows.

By Devik Jain and Susan Mathew