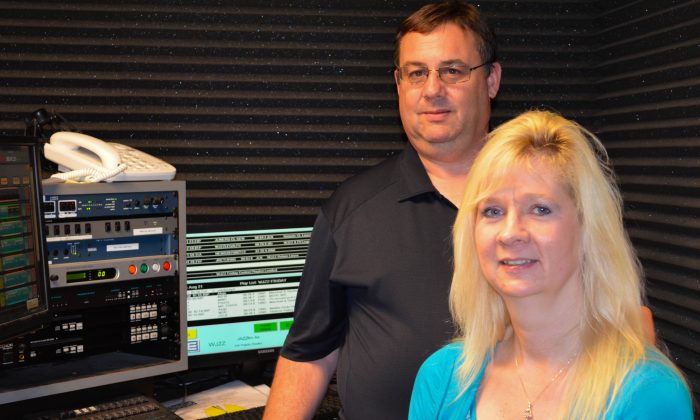 WALL—AM Returns to Its Roots Under Local Ownership

PORT JERVIS—The WALL is back—the WALL—AM 1340, that is. Once called the best of local radio in the Hudson Valley, the station was recently bought by Bud and Julie Williamson and their son who plan to restore true local radio to the region.

The Williamsons exchanged the signal for another with Townsquare Media to purchase WALL. They say they plan to keep it family-owned and independent—not allow it to be controlled by another radio network or company.

The return of WALL is long overdue. The Middletown area has been without live radio programming since 1998, apart from time leased by local legend Mark West from April 2011 until this May.

But from the mid 1940s until 1998 WALL Radio was a local “must listen” for area residents interested in keeping up with what was happening in Orange County. Many of its personalities moved on to careers in major market radio or in administrative positions in the industry.

“The station touched people. [Julie] remembers waking up to WALL radio,” Bud said. “That’s where you got your information. There needs to be that one-on-one communication.”

The Williamsons have deep roots in the community. Both grew up in the area, and now live in Mount Hope. “My background and training in radio stressed the local connection and being a part of the community,” Bud said.

Julie’s background is in accounting and will manage the financial side. She doesn’t come with her husband’s deep experience in the media, but does whatever is needed—promotions, sales, even a commercial. “I am a radio wife,” she said.

Bud got his first job from former station owner Oscar Wein who trained him to have high standards.

“There is a lot of heritage with WALL radio,” he said and he wants to build on that.

The Williamsons have stations in different markets. The couple started Hudson Valley public radio a year ago, a noncommercial radio station that plays jazz, with a solid cluster of underwriters. Their Port Jervis station WDLC is in Stroudsberg, PA. The Stroudsberg station, Pocono 69.7, does a morning show with its own sales office. They plan the same for WALL, with a studio in Middletown. All stations are streamed.

The family has made their other radio stations profitable and will follow a similar model for WALL. Bud says there are two measures of a station’s success: loyal listeners and steady sales. He stresses that both programming and ads must grab the listeners’ attention. He plans local ads that will compel listeners to go right out and patronize the business.

There are two measures of a station’s success: loyal listeners and steady sales.

“The value of local radio is that we can touch the smaller businesses that may not have the budget to advertise on a larger scale. We are scaled so that we can work with those numbers.” Bud says the listening area has many small businesses that provide good service and deserve to be promoted.

“You can’t get any closer to the roots of this country,” he said.

For radio and television, businesses use repetition to get their message out, which has proven very successful at in the Stroudsburg market. One message will play throughout the day. “We have filled restaurants in the middle of winter,” said Bud.

As with any station, success depends on selling ads. “The difference is we try very hard to make sure those ads are compelling and they get a response.” A creative approach at the right time makes the difference. A local pizza place had a small budget, so the station played very short messages in the evening, which drove up its pizza delivery business. “People heard the ad and said, ‘You know, I want some pizza right now.'”

Finding the right people to work at the station is Bud’s biggest challenge. “I’m reaching to people who’ve worked at WALL before and seeing if they would like to be part of the station.” He wants people who understand what the station wants to accomplish.

He is still finalizing hosts and programming, but has a definite “yes” from Mark West in the 6 a.m. to 10 a.m. slot. West said most of his show will be music with the last hour hosting a guest along with his duck Mortimer, who quacks whenever he wants during the show.

Bud has enlisted Hank Gross from MidHudsonNews.com to cover news on their jazz station WJZZ. In-depth and investigative features will be on WALL, as will special shows.

When asked if WALL will be any different from its former incarnation, Bud said “about 25-30 years” different. New technology has opened more doors to receive information and music. But some things never change Bud says: “There is still the need for human aural communication!”

The music will be “classic hits”—popular oldies of the ’60s, ’70s, and ’80s, which Bud says will fit “right into Orange County.” He thinks this is a good format for both listeners and businesses that want to advertise.

The listener demographic is the 35-plus age group, although Bud says some programs are planned for younger listeners too.

“May you always have walls for the winds” is an old folk blessing. The Williamsons expect WALL 1340 will bring the gentle breezes of great listening for Port Jervis to Monroe, and from Newburgh to Pine Bush on three FM stations—94.9, 94.1, and 105.7.