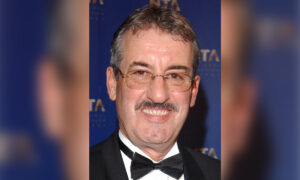 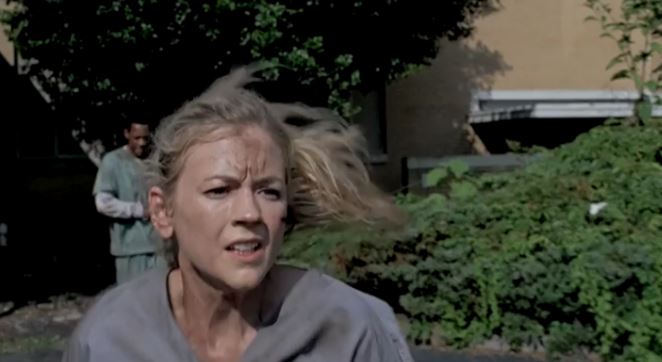 The videos show Beth in season 5 for the first time other than a short series of clips that was included in the season’s Comic-Con trailer.

The videos have been pulled offline but the descriptions for them remain.

One video shows Beth standing at a window looking out from an upper level hospital room at 5:20 p.m. She’s in a gown with her wrist splinted and an IV bag hooked up. She also has a large scratch on her left cheek.

Beth goes to try the door but it’s locked, prompting her to pound on it while yelling. She hears a noise in the hall and backs away from the door, yanking out the IV and preparing to use it as a weapon.

A police officer–the female seen in the trailer–and a man in a lab coat walk in. The man immediately says “Everything is ok,” while the woman tells Beth to drop the IV.

Beth is confused, saying “Where am I?”

The doctor, who says his name is Steven Edwards, says that they’re at Grady Memorial Hospital at Atlanta–which would obviously dispel the rumors that Beth is at the Alexandria Safe Zone.

“How did I get here?” Beth says. “The officers found you on the side of the road surrounded by rotters,” says Officer Dawen Lerner. “Your wrist was fractured and you sustained a superficial head wound,” explains Dr. Edwards. Beth remembers her name, and the clip ends with Beth and the cop staring at each other.

Another clip shows Beth with a male cop in a room that is slightly dark. The man is trying to have sex with Beth. The guy comes on to Beth and says that “it’s a win-win,” with Beth looking scared but nodding yes. The camera pans down to the floor to bloody scissors, with a hand hovering over the scissors and slowly moving around. The guy says “[somebody’s name] she’s not such a team player, and it shows a woman with her arm being cut off lying on the floor.

Yet another clip shows Beth looking down at an unconscious Carol being carried on a stretcher.

“If you recall, we posted back in July about the filming of the scene where Carol was struck by a car, passed out, and then was taken by the white cross people/creepy police offers. So they are taking her back to the hospital,” noted the Spoiling Dead Fans.

“Carol is NOT dead in this scene, and Beth is very much alive at the end of this episode. The episode that this is in is not confirmed. I think we’ll have to take [executive producer Scott] Gimple’s ‘messing with time’ promise seriously and not read too much into who was filming where and when.”

A fourth clip shows Daryl and Michonne, alone and appearing to be surrounded by woods. Daryl is really dirty. Michonne says, “Where’s Carol.”

Daryl shuffles a bit and turns his head and growls “Bring ’em out!”