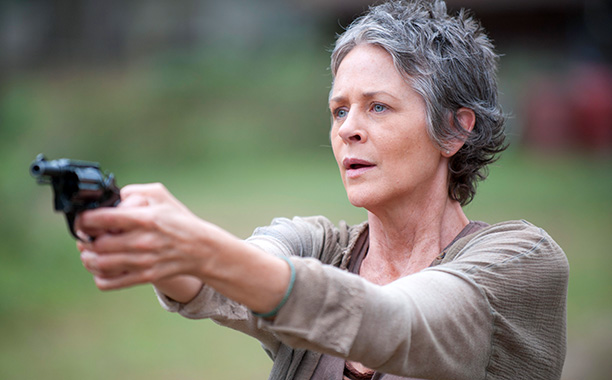 Carol in season 4 of The Walking Dead. (Gene Page/AMC)
Entertainment

A sneak peek of The Walking Dead season 5 showed Carol, Tyreese, and baby Judith still on the train tracks.

The trio had left the house they were at after the situation with the girls. Carol ended up killing Lizzie after Lizzie killed her sister.

In the short sneak peek, which was shown on the Talking Dead special episode on July 6, Carol whispers “more” as a zombie herd moves toward them.

They duck behind a bank in the woods, trying to hide out, as the zombies move toward them.

The official first trailer for the upcoming season, which doesn’t yet have an official release date, will be shown at the San Diego Comic Con on July 25.

A number of other insights into the season were given during the show.

See some snippets below:

Aisha Taylor (guest on the show) — “The humans that are left are better at survival, but more formidable. So when they do cross paths, it’s a lot more explosive, it’s a lot more dangerous. Though they do know how to handle the walkers, they get in each other’s way.

Scott Gimple (showrunner) — backstory for Daryl, Beth, house they were at. “There was a nice old fellow there he was an undertaker, he was taking dead bodies and making them whole before burying them. He died on one of these runs. In a very mundane way. He couldn’t get his nitroglycerin pills in time.”

Lauren Cohan (Maggie) –“We left the group in such turmoil at the end of season 4, and you really are on tetherhooks to see what happens, and what happens is so flipping cool. You know it’s bad, you know it’s basically doe or die. The group has to be so resourceful and so brutal to get out.”

Steven Yeun (Glenn) — “Glenn is his own leader. At this point he’s found through some very dire circumstances what he’s been looking for, which is Maggie, so now he knows that he’s his own man.”

Alanna Masterson (Tara) — “If you put a bunch of psychopaths in one car, inevitably something terrible is going to happen. I don’t think how crazy each one of us is, so when we go off it’s going to be like an atomic bomb.”

Andrew West (Gareth) — Character more like Rick than the Governor. “Mirror image of Rick or even Glenn if he had a different history. He’s not a one-dimensional character. You’re going to get another perspective on what the world is now.”

Denise Huth, executive producer. “This season was unique because we left it at a cliffhanger. Terminus biggest threat that they’ve faced so far. To be trapped by people that are obviously very organized, they have nothing, they don’t have their weapons … it’s going to be a wild ride.”