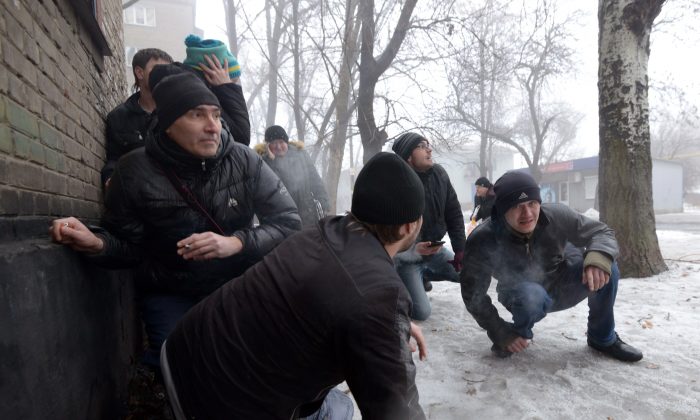 People take cover during a shelling in a residential area in Donetsk's Kyibishevsky district, Ukraine, on Jan. 30, 2015. (Dominique Faget/AFP/Getty Images)
Crisis in Ukraine

Wake Up Europe, Ukraine Can’t Wait Any Longer for Your Help

As is so often the case, the seemingly intractable conflict in Ukraine has largely fallen out of the headlines in recent months. It failed to reward continued media attention with concrete developments and with so much going on elsewhere, this was perhaps predictable. But more worryingly, Ukraine seems to warrant less and less political attention these days too.

This conflict is treated as if it is Ukraine’s problem alone, and not Europe’s. Ukraine’s European partners seemed to feel justified in turning their attention to other things after a ceasefire was agreed in Minsk in September 2014, but they were wrong to think this deal meant anything.

In the hybrid war being fought in and over Ukraine, the ceasefire agreed at Minsk would be a joke but for the number of casualties that accrue by the day.

Donetsk airport, once a symbol of Ukraine’s progress, now testifies to the fragility of international relations and to the need to be vigilant for danger and threat. Russia continues to deny that it has sent troops or military equipment but these claims no no longer, if they ever did, stand up to scrutiny. Its campaigns of misinformation are increasingly being recognised for what they are.

Recent Developments in the Ukraine Conflict

The attack on the port city of Mariupol that killed around 30 people on January 24 seems finally to have woken up the West to the failure of the Minsk agreements. The European Council issued a statement two days later expressing its concern and condemning the loss of innocent lives “during the indiscriminate shelling”.

It went on to explicitly accuse Russia of supporting separatists in the region. One might have hoped that this was a sign that European leaders would no longer tolerate Russia’s evasiveness. Emergency meetings held by both NATO and the EU since then, however, suggest we can expect nothing more than an extension of what we have seen to date. EU and NATO member states have problems of their own and will not take a proactive stance on Ukraine.

In the weeks and months following the start of Euromaidan in January 2014, the Weimar Triangle states (France, Germany and Poland) sent their foreign ministers to Kiev to assist in negotiating an end to the protests and political divisions that had riven Kiev and other parts of the country.

As Ukraine continued to fracture and the conflict became ever more brutal, the EU continued to support Kiev’s position, especially against the Russians who were perceived to be, at best, failing to use their influence with the separatist rebels in the east of Ukraine.

Waves of sanctions against Russia followed and the long-awaited Association Agreement was signed with Ukraine to strengthen economic and political ties. NATO was similarly supportive of the Kiev government and the US condemned Russia in word and deed.

But the condition of Luhansk, Donetsk and now Mariupol all stand as symbols of just how ineffective that help has been. Things are so bad that, increasingly, a frozen conflict looks like being Ukraine’s best hope.

Europe has other pernicious problems. Even as the upcoming Holocaust Memorial Day directed everyone to remember the dangers of racial and religious intolerance, the German Pegida movement captured headlines as thousands of anti-Islamist protesters took to the streets of major German cities.

The protests were fuelled by France’s own troubles following the terrible attacks in Paris. And now Germany is faced with the prospect of tough negotiations to prevent Greece from leaving the eurozone. Any concessions won by Greece will have ripple effects in Spain, Portugal, Italy and elsewhere. There will be little appetite to ramp up support for Ukraine. NATO will fare no better unless the US picks up the bill.

The Consequences of Weakness

Western European states and those organisations central to their security and prosperity have tough decisions to make. There is the matter of ending what is unquestionably a war in Ukraine. The Minsk agreements have not held. That must be acknowledged before the next steps can be taken – and those steps are likely to require military aid to Kiev.

Russia’s role in Ukraine has to be fully exposed – Moscow can no longer be allowed to hide behind denials. If much more time is spent in pondering the nature of Russia’s role rather than combating it, Ukraine will lose huge swathes of its eastern territory as the separatists push westwards to Crimea.

One can easily imagine a scenario like that being played out in South Ossetia and Abkhazia right now, where Russia is well on course to incorporating these former Georgian territories into the Russian Federation.

The messages that will be sent about sovereignty, inviolability of borders, Russian strength and Western weakness will hurtle Europe back into a time of uncertainty, instability and danger. Time is short; European leaders need to decide.

Maxine David is a lecturer in European politics at the University of Surrey.