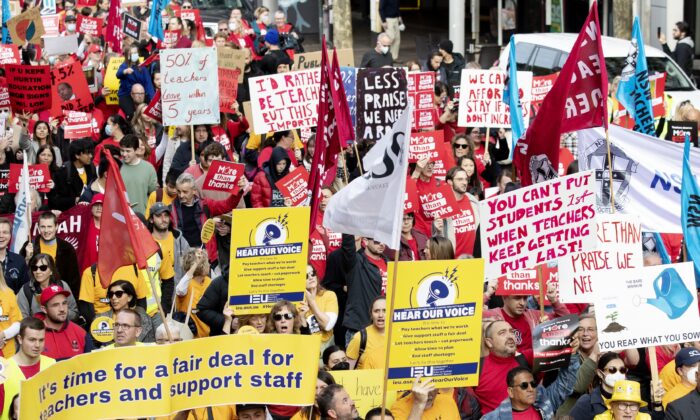 One Australian expert says wage increases for teachers are not a silver bullet for resolving the myriad problems facing the New South Wales’ education sector.

His comment comes after tens of thousands of teachers on June 30 walked off the job in the biggest teacher strike in the state in over 20 years demanding better pay and conditions.

The two unions behind the protest, the New South Wales (NSW) Teachers Federation and Independent Education Union of Australia (IEUA) are demanding a pay increase of five to seven percent, instead of the three percent being offered by the state government.

But Glenn Fahey, director of the education program at the Centre for Independent Studies, was critical of the approach saying it was just a demand for “more pay for less work and less accountability.”

“Everyone wants to ensure that teachers are not overworked and burnt out,” he told The Epoch Times.

“But the union campaign is not seriously engaging in that issue, and has clouded its message by being supposedly about pay conditions, supply of teachers, and burnout rates.”

“It should be engaged with solutions about each of those things, rather than looking at money as a one-size-fits-all band-aid.”

What Are the Facts?

Australian teachers are among the highest paid on average when compared to developed countries and similar professions, with entry-level teachers earning around A$70,000 a year (US$47,900), according to the Organisation for Economic Co-operation and Development (OECD).

However, unless they shift into management positions, more experienced teachers do not receive comparable pay to other professions the longer they work in the field.

Meanwhile, 2019 OECD research revealed one of the main causes of stress for educators was not salary issues, but heavy administrative workloads, school management, and collaboration and lesson preparation—all eating into teaching time.

Also, despite long working hours, teachers’ job satisfaction is comparable to other countries.

According to a March research paper authored by Fahey, the churn rate of early career teachers is around 10-14 percent, which has not changed in 15 years and is lower than other nations on average. This is contrary to union claims that teachers are quitting in droves due to poor salaries and conditions.

Further, Australia has a lower shortage of teachers compared to other countries.

What Are the Solutions?

Fahey told The Epoch Times that the solution to teacher workloads should be to prioritise “top dollar” for high performing educators.

He noted that a “systematic approach” is needed to address the problems, such as reducing paperwork, making sure admin staff ease the workload for teachers, sharing existing resources, and reducing barriers for new teachers to enter the workforce.

“If the unions are serious about recognising the profession, they should engage in a constructive dialogue about how to reward top teachers and improve the practice of underperforming teachers,” he said.

“Instead, the unions refused to accept those sorts of flexible approaches and put up walls instead.”

He argued that the strike action was a ploy to trick the public into thinking Australians were against teachers.

“They [unions] are consistently in a war mentality, in an effort to extract money from the taxpayer, and ultimately from parents in that end.”

The Stance of the Unions

Angelo Gavrielatos, president of the NSW Teachers Federation, criticised the NSW government for its three percent pay increase offer as a “take it or leave it proposition” and argued it was “far below inflation.”

“If we don’t pay teachers what they are worth, we won’t get the teachers we need,” he said in a statement on June 30.

“Our members are exhausted and burnt out,” he said on June 21.

The Epoch Times has reached out to the NSW Teachers Federation and IEU but didn’t receive a response in time for publication.

“It’s not a coincidence that it’s all happening at once, and that we’re a Coalition government, but we’ll keep working in good faith.”

“We said in the budget [that] we’d look to put a more generous public sector pay increase on the table. That’s exactly what we’ve done. It’s more than any other teacher can expect anywhere else in the country,” she told Nine News on June 30.