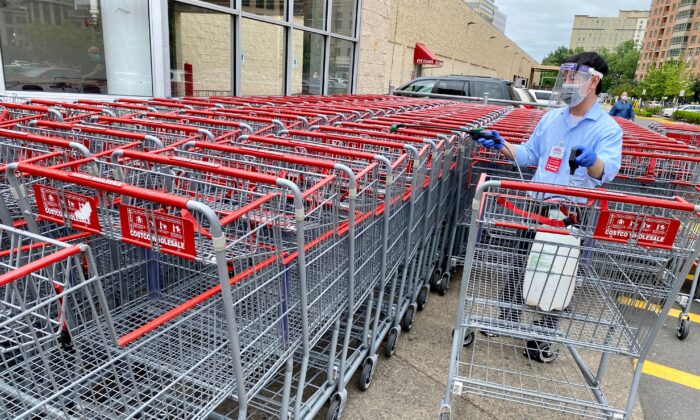 A Costco employee sprays disinfectant on shopping carts in Arlington, Va., on May 24, 2020. (Daniel Slim/AFP via Getty Images)
Economy

Third-quarter wages in the United States increased 3.3 percent, in line with growth in the months before the COVID-19 pandemic, while job switchers’ pay is up 6.6 percent since September 2020, as employers sought to attract new workers with competitive compensation, according to the ADP Research Institute Workforce Vitality Report (WVR) released Oct. 27.

Employment growth also increased by 4.1 percent year-over-year in September 2021, according to the report (pdf), with positive wage growth across almost all trade sectors including professional services and construction, which lead the way.

The information sector reported no net change in employment, while the leisure and hospitality industry, one of the hardest-hit by the pandemic, experienced the biggest gain with 15 percent employment growth as it slowly recovers from hefty layoffs.

By firm size, employees from mid- to large-size firms saw higher wage growth than those employed at small businesses.

Among those switching jobs, females did so at a higher rate than males at 22.4 percent compared to 20.6 percent, respectively, and also saw slightly higher wage growth, although part of the reason for the gap in wage growth is down to the different industry composition of jobs recovered for men and women, ADP said.

The most significant wage growth was seen in employees age 24 or less and workers over the age of 55, which ADP notes could be due in part to those age groups rejoining the workforce post-pandemic.

“According to ADP data, U.S. wage growth has begun to align with pre-pandemic levels, reporting 3.3 percent increase for all employees. Though overall wage growth is normalizing back to pre-pandemic levels, the uptick in hiring demand is still boosting pay for job switchers, whose wages grew 6.6 percent from last year,” Nela Richardson, ADP’s chief economist, said in a statement.

“As the economy continues to regain lost footing due to the pandemic, we are seeing pockets of unevenness in wage growth across the workforce as employers continue to offer competitive compensation, as well as in sectors such as leisure and hospitality which reported the greatest employment gains. Further, females switched jobs at a higher rate than men and outpaced their male counterparts in wage growth and job switching wage growth, though from a lower wage level,” Richardson added.

Multiple companies, particularly those in the dining and hospitality sector, as well as small-business owners, are increasing pay for employees in an effort to counteract shortages and attract workers amid hiring difficulties because of the COVID-19 pandemic.

Starbucks and Costco announced last month that they are raising the hourly wage for their employees across the United States in an effort to recruit more workers amid a nationwide labor shortage.

Walmart announced in September that it will raise the hourly wages for more than 565,000 of its store workers by at least $1, in the thick of fierce competition among companies for skilled workers.

Target, CVS Health, and Walgreens Boots Alliance are just a handful of other companies that have all said they are boosting starting wages to $15 an hour, in line with President Joe Biden’s push to raise the minimum wage to the same amount.

However, economists fear that the sharp rise in wages versus a declining employment rate could contribute to increased levels of inflation, adding extra pressure on central bankers trying to steer their countries out of economic turmoil.

The Labor Department stated in a recent release (pdf) that real average hourly earnings—which are adjusted for inflation—rose 0.1 percent from July to August and by 0.2 percent from August to September.

At a Nov. 2 press briefing in Glasgow, Scotland, Biden said wages were rising faster than inflation, telling reporters: “Things are a hell of a lot better, and the wages have gone up higher—faster than inflation. And we have generated real economic growth.”

While Biden’s remarks on wages rising faster than prices was accurate, when viewed on a monthly basis for the months of August and September, over-the-year inflation in September was actually higher than wage growth.