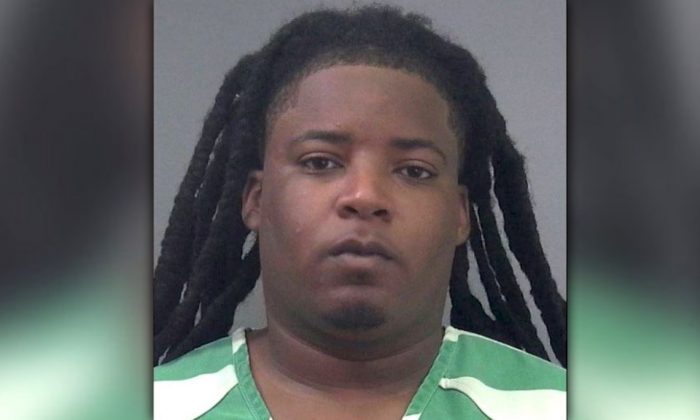 Ezekiel Hicks, 25, was arrested on murder charges in the death of 41-year-old Craig Brewer in Gainesville, Florida, on April 7, 2019. (Alachua County Sheriff’s Office)
Crime and Incidents

A good Samaritan was shot and killed in Florida while handing out $20 bills and paying for meals at a Waffle House restaurant.

The Alachua County Sheriff’s Office said in a statement that 41-year-old Craig Brewer was fatally shot on April 7 at the Gainesville eatery, located about 4 miles from the University of Florida campus.

Officials with the Alachua County Sheriff’s Office said in a statement that prior to the shooting, Hicks and the victim were involved in an altercation.

Witnesses cited by ABC News said the victim was arguing with a female acquaintance of the suspect. The woman was allegedly upset because she didn’t benefit from Brewer’s big-hearted splurge.

Hicks became involved in the dispute, police said, and then left the restaurant to get a 9mm handgun.

Police said at least one bystander tried to persuade Hicks not to go back into the Waffle House.

“Despite the efforts of at least one bystander, the suspect went back inside and immediately approached the victim,” said Lt. Brett Rhodenizer, an Alachua County Sheriff’s Office spokesman, adding, “a physical fight ensued near the entrance.”

Police said that during the scuffle, the gunman shot the victim in the head.

“As the fight continued, the suspect took the handgun from his pants and shot Brewer in the head,” Rhodenizer noted.

“A dude in a big shirt, a really big dude in a green shirt came in, shot some dude in the head and ran away,” a caller told a 911 dispatcher, according to WCJB.

Hicks was arrested in the parking lot. He faces charges of first-degree murder and carrying an unlicensed firearm.

Police recovered the weapon at the scene.

Sheriff’s officials said the entire incident was caught on the restaurant’s surveillance cameras.

“Out of all the investigations that I’ve seen, very seldom do you have an incident from start to finish on video that ends in a murder,” Rhodenizer said, according to ABC.

“This incident went from a verbal altercation to a homicide in minutes, if not seconds,” Rhodenizer told the news outlet.

In related news, at least four people died when a nearly nude gunman opened fire at a Waffle House restaurant near Nashville, Tennessee, on April 22, 2018.

Literally in my backyard. Keeping an eye out from upstairs window. Scary pic.twitter.com/DJHrqvRN9t

The death toll could have been higher if not for fast action by a 29-year-old “hero” who snatched away the shooter’s rifle, likely saving many more lives, said Don Aaron, spokesman for the Metropolitan Nashville Police, Reuters reported.

Travis Reinking, 29, was later arrested in connection with the incident. He escaped immediately following the shooting, but was discovered the next day after a manhunt, NBC News reported.

He was evaluated by Dr. Rena Isen, a forensic psychologist with the Middle Tennessee Mental Health Institute. She announced her findings in court on Aug. 22, 2018. She said he is schizophrenic, has hallucinations, and doesn’t understand the court system, WSMV reported.

General Sessions Judge Mark Fishburn said Reinking needs to stay at a secure mental facility, otherwise he could cause more harm to the public or hurt himself.

“He is ill and he needs help. I’m not angry. I’m not upset at all. He needs help,” said Di’Angelo Groves, brother of DeEbony Groves, one of the victims, via WSMV.

Fishburn said the court will check back every six months while Reinking undergoes treatment for mental illness.