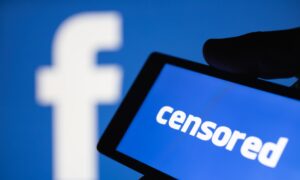 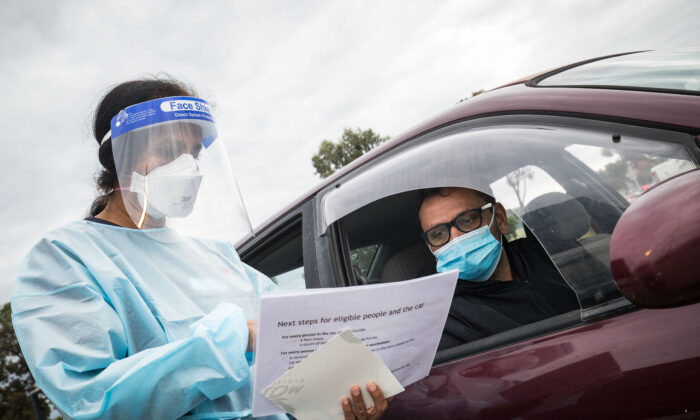 A nurse takes a man's information before administering the Pfizer COVID-19 vaccine at a drive through vaccination centre in Melton, Melbourne, Victoria on Aug. 09, 2021. (Photo by Darrian Traynor/Getty Images)
Australia

Mining magnate, Clive Palmer, is set to launch a High Court challenge against the Western Australia (WA) government after claiming the state’s decision to bolt its borders against New South Wales’ unvaccinated is unconstitutional.

Last week, WA Premier Mark McGowan announced that the state would be imposing a hard border with New South Wales following growing numbers of cases of the Delta variant of the CCP (Chinese Communist Party) virus.

The border closure marks WA’s tenth shutdown against other states since December of last year but is the first to single out and block entry to Australian residents based on vaccination status.

“By restricting free movement of Australian citizens within Australia and creating an island-within-an-island, the WA COVID-19 eradication strategy is unconstitutional,” Palmer said in a statement on Monday, reported news.com.au.

In particular, Palmer was referring to section 92 of the Australian constitution, which states that passage between states “shall be absolutely free.”

Palmer had previously taken WA to court over a similar alleged violation, but the High Court ruled against the case as it believed the government acted under the Emergency Management Act (pdf).

Section 67 of the act grants the state powers to direct or prohibit the movement of persons to or in an emergency area “for the purpose of emergency management.”

Head of law at Sheridan Institute and former law reform commissioner, Augusto Zimmermann, said last year’s ruling spurred disagreements in the legal community as many believed it went against the nation’s founding principles.

“Even though the Constitution is very clear—that it should be absolutely free—they came up with an argument that is extremely controversial,” Zimmermann told The Epoch Times.

But Palmer pointed to a difference between the cases; namely, that the current border restrictions involved a vaccine mandate—one which he claimed was unable to suppress the Delta variant.

Specifically, Palmer cited international studies that suggested the jab was ineffective against the Delta strain, potentially making the vaccination rule no longer fulfil the act’s requirement to be “for the purpose of emergency management.”

“We are seeing data from millions of people in the UK and Israel that shows conclusively in regards to the Delta variant that the vaccines do close to, or absolutely nothing, to stopping COVID infection,” Palmer said.

“The vaccines do nothing to stop the spread of COVID-19 given that the infection rate in vaccinated and unvaccinated people is close to identical.”

Despite around 55 percent of Israel being fully vaccinated, Israeli officials said in June that about half of all adults infected with the Delta variant were fully vaccinated, with Israeli Prime Minister Naftali Bennett telling reporters last month that Pfizer seemed to be “significantly less” effective against the strain.

And an early analysis by Public Health England also said it might have found similar levels of the Delta variant in vaccinated and unvaccinated individuals, suggesting the strain had not been hampered by an individual’s vaccination status.

Though Zimmermann believes that Palmer had “really good grounds” for the challenge, he said that a combination of political motivations and a history of questionable court outcomes meant he did not trust that the outcome would be successful.

“These appointments tend to be very political,” Zimmermann said. “The judges and justices of the High Court have made very controversial decisions more recently that makes me very suspicious as to whether they are going to really faithfully uphold the rule of law.”

“These judges are not going to challenge the status quo. I think that they are under too much pressure to do what the politicians want,” Zimmermann added. “They are not going to do the right thing, in my opinion, unfortunately.”

However, McGowan rebuked Palmer’s claims, saying that his actions were solely to safeguard the state’s residents.

“Just like our border controls last year, the measures we have put in place are there to protect West Australians,” McGowan said, reported news.com.au.

“The Delta variant is running rampant right across the country, and I’ll do everything I can to keep WA safe.”

This year, the premier’s border restrictions and snap lockdown measures following single-digit cases have successfully prevented a significant outbreak within the state.

McGowan also called out the billionaire for pitting against the government once again.

“Another day and another legal challenge from Mr Palmer,” McGowan said.