Half of Adults Infected in Latest COVID-19 Outbreak Were Fully Vaccinated: Israeli Official 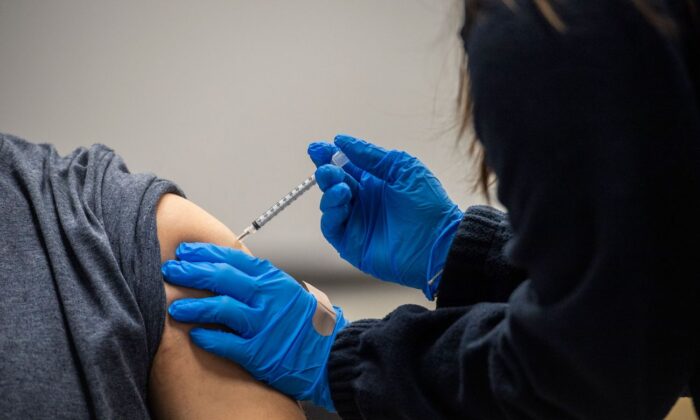 A person is inoculated with a vaccine in Chelsea, Mass. on Feb. 16, 2021. (Joseph Prezioso/AFP via Getty Images)
By Jack Phillips

About 90 percent of new COVID-19 infections in Israel were caused by the CCP virus’s Delta variant, officials said, while adding that about half of the adults infected in the recent outbreak were fully vaccinated.

Ran Balicer, who leads an expert advisory panel for the Israeli government, in announcing the finding on Friday, said that the country might end up implementing another lockdown after opening up earlier this year, according to the Wall Street Journal. The fully vaccinated individuals were inoculated with the Pfizer COVID-19 shot commonly used in Israel.

“The entrance of the delta variant has changed the transition dynamics,” he noted, referring to the B.1.617.2 strain of COVID-19 that has now been detected in more than 70 countries. COVID-19 is the illness caused by the CCP (Chinese Communist Party) virus, otherwise known as the novel coronavirus.

New cases of the virus rose to more than 200 on Thursday, from around 10 per day in most of June, officials said.

And on Friday, Israeli authorities told residents that they must again have to wear masks again indoors, reported Reuters.

The health ministry reimposed the mask requirement for all indoor settings except the home, and said it was also recommending masks be worn at large outdoor gatherings, specifically mentioning gay pride events taking place around Israel this weekend.

Some 55 percent of Israel’s 9.3 million population have received both doses of the Pfizer vaccine, officials said. Eligibility was extended to 12- to 15-year-olds in May.

“Our goal at the moment, first and foremost, is to safeguard the citizens of Israel from the Delta variant that is running amok in the world,” Israeli Prime Minister Naftali Bennett said Wednesday, reported the WSJ.

The reimposition of the country’s mask mandate and potentially a new lockdown is sure to prompt questions about the general effectiveness of COVID-19 vaccines—and amid reports of so-called “breakthrough” cases in recent weeks.

Earlier this month, for example, nearly 4,000 fully vaccinated people in Massachusetts tested positive for the CCP virus, according to health officials in the state.

And on April 30, the CDC reported that some 10,626 breakthrough cases were reported in 46 states and territories.

The World Health Organization (WHO) says on its website that COVID-19 vaccines should work against the Delta strain as well as other COVID-19 variants.

However, the U.N. agency warned that  “changes or mutations in the virus should not make vaccines completely ineffective,” adding that if the “vaccines prove to be less effective against one or more variants, it will be possible to change the composition of the vaccines to protect against these variants.”