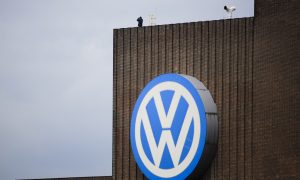 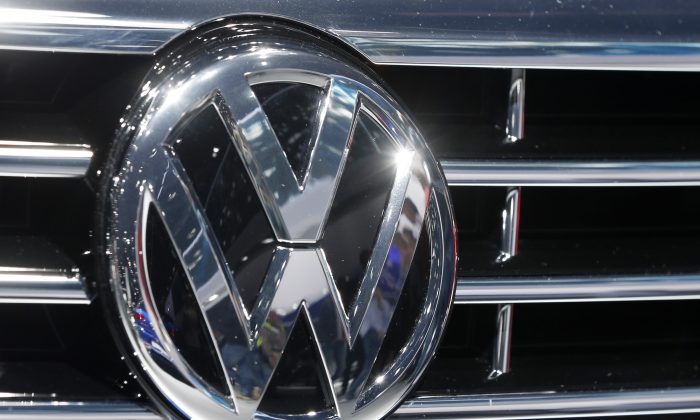 FILE - In this Sept. 22, 2015, file photo, the Volkswagen logo of a car is photographed during a car show in Frankfurt, Germany. A dealer familiar with Volkswagen's plans says the automaker intends to offer $1,000 in gift cards and vouchers to owners of smaller diesel cars as a gesture of goodwill to owners with 2-liter four-cylinder diesel engines that have been implicated in an emissions cheating scandal. (AP Photo/Michael Probst, File)
Companies

BERLIN—Volkswagen said on March 13 it would halt preparations for an initial public offering (IPO) of its trucks unit Traton until market conditions improve, stalling what was expected to be Germany’s biggest share offering this year.

The automaker had previously said it could list up to 25 percent of Traton in a deal that was expected to raise 5-6 billion euros ($12 billion).

Volkswagen said it would still aim for an IPO once market conditions improve.

“We regret having to distance ourselves, because of currently weak market conditions, from a stock market listing of Traton SE,” Volkswagen Group’s Chief Financial Officer Frank Witter said.

Volkswagen’s management board still believes in the rationale of a stock market listing when market conditions improve, Witter said.

Britain’s looming departure from the European Union and a trade dispute between the United States and China have caused uncertainty on stock markets, making investors hesitant.

Sharp fluctuations in the markets make it difficult to determine the price for an IPO.

In September Volvo Cars and its Chinese owner, Geely also postponed plans to list the Swedish carmaker blaming trade tensions and a downturn in the automotive industry. Proceeds from European listings are down 97 percent so far this year, according to Refinitiv data.

Volkswagen’s management board unanimously backed plans for listing Traton and had in recent days been considering modifying its plan, including reducing the stake of Traton that it planned to float to 15 percent from 25 percent, people close to the matter said.

On March 12, Volkswagen’s Chief Financial Officer Frank Witter said the board unanimously backed the idea of listing Traton but warned markets remained volatile. On Monday he had said an IPO of Traton would not come at any price.

J.P Morgan, Goldman Sachs, Deutsche Bank, and Citi had been hired as global coordinators for the listing.

One of the top bankers involved, who spoke under the condition of anonymity, had said it would be foolish not to do the IPO now because truck markets would be worse off next year.

“VW certainly takes its responsibility to maximize shareholder value seriously, which we think has been the rationale behind pulling the IPO on current valuations. Looks like we should respect this,” analysts at Evercore ISI wrote.

A flotation could have given the business the resources to deepen its relationship with Navistar, a U.S. truck maker in which it currently owns a 16.85 percent stake.