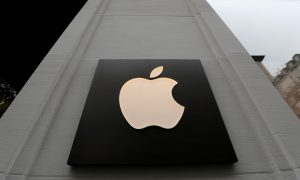 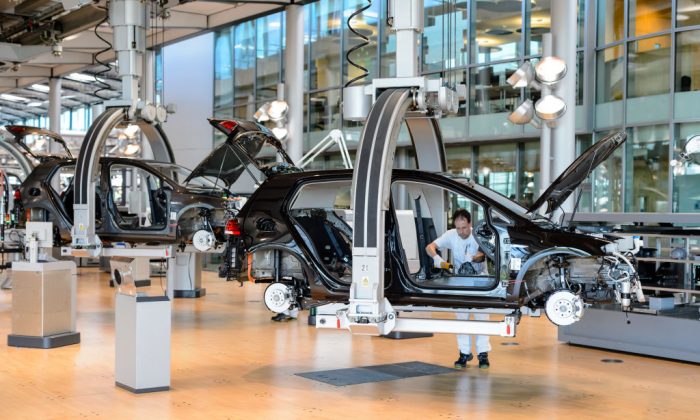 An employee works on a Volkswagen e-Golf electric automobile on the assembly line inside the Volkswagen AG (VW) factory on May 8, 2018 in Dresden, Germany. (Jens Schlueter/Getty Images)
Tech News

DETROIT—Volkswagen AG and Ford Motor Co. said on Jan. 15 they will join forces on commercial vans and pickups and are exploring joint development of electric and self-driving technology, actions meant to save the automakers billions of dollars.

Ford and VW announced their partnership against the backdrop of the Detroit auto show. The tie-up, which starts with sales of vans and medium-sized pickups in 2022, will not involve a merger or equity stakes, the companies said.

“It is no secret that our industry is undergoing fundamental change, resulting from widespread electrification, ever stricter emission regulation, digitization, the shift towards autonomous driving, and not least the changing customer preferences,” Volkswagen Chief Executive Herbert Diess told reporters and analysts on a conference call.

“Carmakers around the globe therefore are investing heavily to align their portfolios to future needs and accelerate their innovation cycles,” he added. “In such an environment, it just makes sense to share investment.”

A deal centered around vans and pickups had been expected. Investors are now focused on the potential for additional deals they believe could offer greater savings. Those include potential deals around development of electric or self-driving vehicles, as well as combining forces in markets including North America, South America, Europe, or China.

The expanding alliance, which will be governed by a joint committee that includes the CEOs of both companies, highlights the growing pressure on global automakers to manage the costs of developing electric and self-driving vehicles, as well as technology to meet tougher emissions standards for millions of internal combustion vehicles they will sell in coming years.

“You can’t do this alone,” Ford’s chief executive, Jim Hackett, said on the call.

Ford will provide more details on how the alliance affects Ford’s regional operations in coming weeks, but does not expect any job cuts in its plants as a result of the alliance, he said.

Ford will engineer and build medium-sized pickups for both companies, Volkswagen said. Ford officials said the VW pickups will initially be available only in the South American, European, and African markets.

Ford will also engineer and build larger commercial vans for European customers, while Volkswagen will develop and build a city van. Vans could be built in Ford’s plant in Turkey, VW said.

Ford and VW have signed a memorandum of understanding to jointly develop electric and self-driving vehicles, Diess said. Both executives said they were optimistic those deals would be finalized but provided no timeline.

Sources previously said the framework of such a deal would include VW investing in Ford’s autonomous vehicle operations, including its Argo AI business.

“Cutting costs by sharing vehicle architectures and manufacturing facilities is just table stakes in this new world,” she added.

US and China Slowdowns

Europe’s biggest automaker and the No. 2 U.S. automaker have been exploring closer cooperation as trade frictions force carmakers to rethink where they build vehicles for Europe, the United States, and China. Slowdowns in the world’s largest auto markets—China and the United States—have ratcheted up the pressure to cut costs.

The tie-up with Volkswagen is a big bet for Ford’s Hackett since he took over in May 2017 from the ousted Mark Fields with the mandate to speed up decision-making and cut costs. Some analysts and investors have been frustrated by Ford’s laggard stock price and a perceived lack of details from Hackett about the Dearborn, Michigan-based automaker’s $11 billion restructuring.

The two companies previously shared vehicle development and assembly in South America in a joint venture called Autolatina, which was dissolved in 1995.

Last week, Ford said it would cut thousands of jobs, discontinue building money-losing vehicles and look at closing plants as part of a turnaround effort for its unprofitable European business. Ford’s president of global markets, Jim Farley, said on the conference call that the company will do “whatever it takes” to get Europe back to profitability.

Hackett also reiterated that Ford, which is controlled by the Ford family, remains committed to the dividend, which some investors have speculated could be at risk.

Last month, Volkswagen announced another 3 billion euros ($3.4 billion) of cost cuts as part of its effort to improve profit margins and fund its shift to electric cars and automated driving.

On Jan. 14, Volkswagen said it would invest $800 million to build an electric vehicle plant in Chattanooga, Tennessee, prompting President Donald Trump to congratulate the city and state in a post on Twitter the following day.