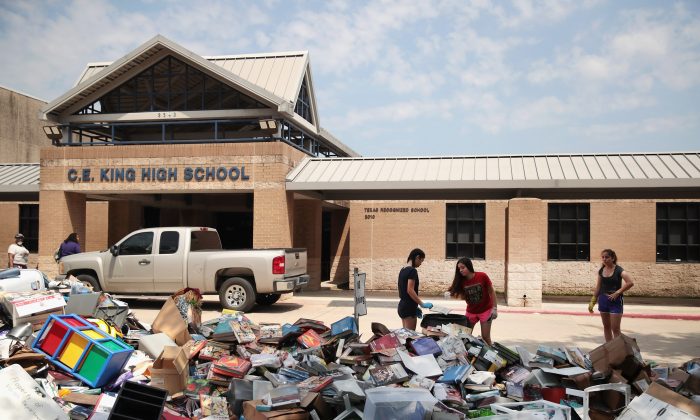 Volunteers and students from C.E. King High School help to clean up the school after torrential rains caused widespread flooding in the area during Hurricane and Tropical Storm Harvey on September 1, 2017 in Houston, Texas. (Scott Olson/Getty Images)
News

VP Pence Pitches Wood and Texans Step Up After Harvey

Cynics will call it a photo op. Others will say Vice President Mike Pence and Texas Gov. Greg Abbott are trying to lead by example, showing Texans what it will take to get past what might be the worst disaster in Texas history.

Pence and Abbott made some appearances in disaster zones on Thursday, Aug. 31, and addressed crowds affected by Hurricane Harvey.

And then, after their speeches, they rolled up their sleeves and did some physical work.

Hurricane Harvey is predicted to be the costliest disaster in American history and early on officials began calling on citizens to step up to help deal with what was coming.

“It’s going to require the citizens getting involved,” he said.

The storm and flooding that followed have claimed nearly 46 lives so far, though that tally could be incomplete.

And there have been reports of looting, prompting district attorneys in affected counties to warn would-be criminals that penalties jump for burglary and other crimes in disaster zones.

But it seems that so far, communities have held together and stepped up.

“The people of Texas and Louisiana were hit very hard by a historic flood and their response taught us all a lesson, a very, very powerful lesson,” President Donald Trump told charity officials in the Oval Office on Friday according to Reuters and Bloomberg.

“There was an outbreak of compassion only … and it really inspired us as a nation,” he said.

“There was no outbreak in crime. There was an outbreak of compassion only,” says Trump in Oval with charity officials. per @margarettalev

Abbot, who has been pushing fundraising efforts to help with the rebuilding, wrote of his pride in “fearless emergency responders and of the armada of selfless citizens who have worked so tirelessly to rescue those in need,” in a Caller Times op-ed on Wednesday.

“No force of nature is more powerful than Texans helping Texans,” he wrote.

“The moments of heroism and selflessness witnessed this weekend demonstrate what it is to be a Texan, a neighbor, a friend. We’ve seen the best of America and a reaffirmation of the unshakable bonds of our humanity.”

This is the line at the @BakerRipley Shelter at @NRGParkFan — these aren’t the guests, they’re the volunteers! #HurricaneHarvey pic.twitter.com/hnt92lGSJK