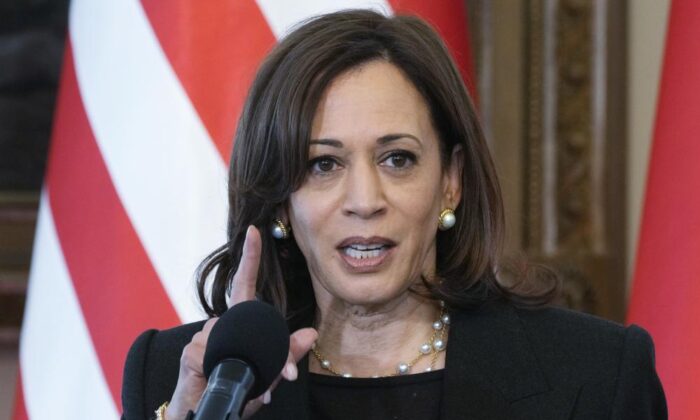 “The United States is a proud Pacific nation and has an enduring commitment to the Pacific islands, which is why President Joe Biden and I seek to strengthen our partnership with you,” Harris said.

“We recognize that, in recent years, the Pacific islands may not have received the diplomatic attention and support that you deserve. So today I am here to tell you directly, we are going to change that.”

The Slow Pivot to the Pacific

The PIF is an 18-nation body that aims to increase regional cooperation through the building of a Pacific trade bloc and joint peacekeeping operations. The U.S. territories of American Samoa, Guam, and the Northern Mariana Islands maintain observer status in the PIF, but the United States is not a member nation.

Harris was invited to speak by the Prime Minister of Fiji, Frank Bainimarama, who is the PIF’s current chair. No other representatives from the PIF’s dialogue partners, which include China, France, and the UK, were issued an invitation.

A White House fact sheet released ahead of the meeting said that the promises reflected a “growing commitment to the Pacific Islands region.”

Among the commitments announced by Harris were efforts to establish new U.S. embassies in Kiribati and Tonga, increased funding for numerous economic and environmental programs, and an announcement that the United States would appoint its first-ever envoy to the PIF.

Harris also told the PIF that the United States would make progress toward re-establishing a regional mission of the United States Agency for International Development in Fiji, and bring the Peace Corps to the Pacific islands.

In all, Harris’ address served to underscore the momentum of the United States’ so-called “Pacific pivot,” which was announced by the Obama administration in 2011, but which is only now solidifying around what the current administration has termed the “pacing challenge” of China.

A China Strategy Without ‘China’

White House documents announcing the PIF appearance and Harris herself were careful not to single China out by name. There are indications, however, that the renewed focus on Pacific partnerships through the PIF is related to the United States’ ongoing strategic competition with China.

Specifically, Harris used her PIF appearance to announce that the Biden administration would design and release the first-ever U.S. National Strategy on the Pacific Islands.

“The Biden-Harris Administration will craft and publish the first-ever U.S. strategy on the Pacific Islands—a whole-of-government strategy to prioritize the Pacific Islands in American foreign policy and drive effective implementation,” the White House said.

That strategy, it added, would be nested under the greater Indo-Pacific Strategy of the United States (pdf), which the Biden administration released earlier in the year and which contends with China’s efforts to remake the global order in its favor.

As such, Harris’ appearance at the PIF appears to be a realization of one of the administration’s key strategic concepts for the Indo-Pacific: to leverage regional partnerships in order to shape China’s environment.

“Our objective is not to change [China] but to shape the strategic environment in which it operates, building a balance of influence in the world that is maximally favorable to the United States, our allies and partners, and the interests and values we share,” the Indo-Pacific Strategy reads.

To that end, the White House appears eager to further develop relations with the PIF in order to actively build a regional coalition more favorable to Western-style democracies.

In the words of the White House’s PIF fact sheet, the administration is “bolstering Pacific regionalism” and “expanding opportunities between the Pacific and the world.”

Another indicator that the move was made with China in mind was the White House’s announcement that it would be focusing on regional cooperation “to combat the scourge of illegal, unreported, and unregulated fishing,” an issue which the administration has previously accused China of being the greatest perpetrator of.

Still, the administration was careful to clarify that the purpose of the visit was not to drive a wedge between China and the PIF nations, but to improve engagement between the PIF and the United States in a positive way.

“So this is not about countering any one country or China. It’s about the positive engagement that these leaders are asking for and we’re trying to be responsive to.”

To that end, the administration hailed Harris’ invitation and subsequent address as evidence of a meaningful development in relations between the United States and Pacific island nations.

“We think this invitation speaks to the longstanding and deep partnership the United States has with the Pacific Islands, and our mutual interest in strengthening our relationships,” the official said.

“We have a very strong foundation with the Pacific Islands, including historic ties, deep people-to-people bonds, and shared interests and values. And we believe that we’re now embarking on a new chapter in this longstanding partnership.”