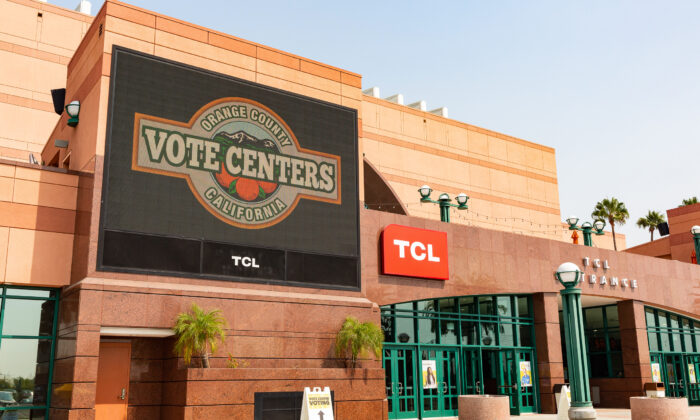 A sign outside the Honda Center announces the arena's temporary transformation into a polling location in Anaheim, Calif., on Sept. 16, 2020. (John Fredricks/The Epoch Times)
Southern California

With Election Day just days away, hundreds of voting centers opened across Orange County and Southern California on Oct. 30.

Orange County has 160 voting center locations, including a “super” vote center at the Honda Center, organized through a partnership with the Anaheim Ducks and the Orange County Registrar of Voters.

“The site will provide a full-service voting experience to all Orange County voters, including the ability to cast ballots via the drive-thru voting, which is unique to Orange County,” according to a statement by the Ducks.

While the deadline for online or mail voter registration was Oct. 19, all vote centers will allow voters to register to vote or resolve registration issues on-site until Nov. 3.

Voters can also return vote-by-mail ballots or vote in-person at the centers. Replacement ballots will also be available to those who lost their ballots or made a mistake on their ballot.

Anyone eligible to vote in Orange County can visit any voting center in the county, regardless of the voter’s home address. Locations can be found at the Orange County Registrar of Voters website at ocvote.com.

There are also numerous ballot drop boxes for those who wish to simply drop off the ballot that was automatically sent to them through the mail.

Gov. Gavin Newsom issued an executive order in May that required a vote-by-mail ballot to be sent to all registered voters, regardless of whether they requested to vote by mail.

The early voting message appears to be having an impact. According to the Los Angeles County Registrar-Recorder/County Clerk’s Office, more than 2.1 million vote-by-mail ballots had already been received as of Oct. 29, roughly five times the number that were returned by the same point in 2016’s presidential election.

In Orange County, more than 813,000 ballots had already been received by the Registrar’s Office as of the morning of Oct. 30.

Orange County election officials have announced they will release a tally of all early ballots shortly after the polls close, as will the state of California.

However, new rules this year allow the counting of any mail-in ballot that is postmarked by Nov. 3 and received as late as Nov. 20. Officials have 30 days after the election to tally all ballots and certify the results.

“On Election Night, we will have a good picture of most contests, but the outcomes of close contests may take days or weeks to settle. This is normal,” Secretary of State Alex Padilla said in a statement.

The shift to regional voting centers instead of local precincts means it will be more difficult for the public and media outlets to track what percentage of votes have been counted on election night and how many remain to be tallied.

The previous precinct model allowed observers to track the percentage of precincts that have had their ballots counted—giving an idea of how many votes still needed to be tallied. But the new vote center system allowing people to cast a ballot wherever they like regardless of residence means it won’t be known how many additional ballots are yet to be counted at any point on election night.