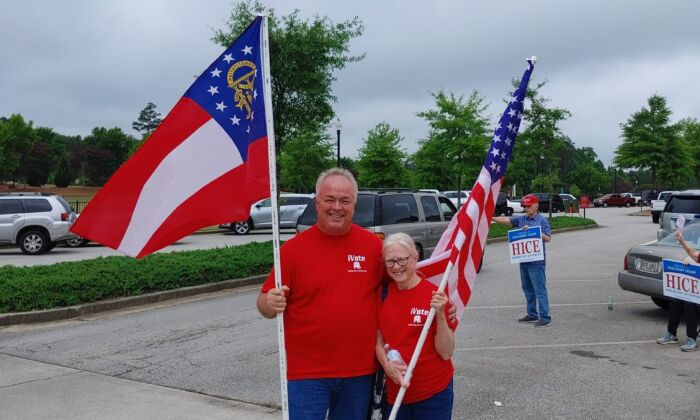 DALLAS, Georgia—Not far from the voting precinct at the Paulding County Courthouse, Jennifer Strahan shakes hands and talks to voters who are ready to cast their ballots in the May 24 Georgia primary.

Among the races that residents in this part of northwest Georgia will decide is whether Rep. Marjorie Taylor Greene will advance to the general election in the 14th Congressional District race or suffer the same fate as Rep. Madison Cawthorn, who was defeated in last week’s GOP primary in North Carolina.

A first-time candidate for any elected office, Strahan describes herself as a wife, a mother, a business owner, and a Christian. She earned a doctorate in healthcare leadership and founded an advisory firm that helps healthcare businesses significantly reduce wasteful spending.

“We help organizations do what they say they do, and do it efficiently and effectively,” Strahan told The Epoch Times. “I would say that same approach is needed in Congress.”

Like Strahan, Greene is a wife and a mother who owned a business and was a first-time candidate at any level when she ran in 2020. Since her freshman term started, Greene has received widespread criticism for what opponents call divisive conduct.

An unapologetic supporter of President Donald Trump and his “America First” platform, Greene is outspoken about a wide range of topics.

Those who implement COVID-19 shot mandates are “vaccine Nazis,” she has also said.

These are just a sample of the forthright rhetoric Greene has used in her first term.

In 2020, Greene encountered what was deemed a setback when House Democrats and 11 Republicans voted to remove her from committee assignments because of her “outrageous beliefs” and controversial social media posts.

Strahan, who has raised around $400,000 for her campaign compared to Greene’s $9 million, believes that 14th District residents are ready for a change.

In an early May debate, Strahan said, “We’ve heard a lot of talk, and our district has nothing to show for it. We need a representative who works effectively with colleagues, and navigates the legislative process to push Georgia priorities forward while protecting our constitutional freedoms.”

As she waved to cars streaming into the voting precinct parking lot outside of Dallas, Georgia, on May 24, she reiterated those feelings, adding that Greene is unable to produce “positive results” because she was removed from committees and does not get along with representatives across the aisle.

“We undoubtedly must have a comprehensive view and we must push back on the progressive agenda we are seeing in Washington,” Strahan explained. “However, when you don’t have relationships with colleagues you can’t do that.

“That hurts our district, our communities, and our citizens when we don’t have an effective voice representing us,” Strahan added. “You don’t have to sacrifice effectiveness for conservative values. I will show that if I am elected.”

Strahan and her team are confident that a “strong ground game” will lead to favorable results when polls close on May 24 and the numbers are announced.

Georgia’s 14th Congressional District is abundantly conservative. According to Georgiavotes.com, it is 70 percent Republican.

Spanning from a part of northwest Georgia that stretches from metro Atlanta to the state line at Chattanooga, Tennessee, the district still heavily favors Republicans, even after boundaries were slightly shifted in 2021.

Greene is among the top fundraisers in Congress having raised more than $9 million, according to the Federal Election Commission. Before the May 24 primary, she topped $6.6 million in campaign spending.

Greene is polarizing, Jim Tully admits, but “it is a myth that so many people in the 14th District don’t like her.”

“Her detractors represent a small fraction of the people here,” said Tully, who is chairman of the Paulding County Republican Party.

“Most people here appreciate her courage to say what they believe. And why wouldn’t they? She says what many of us are thinking.”

Tully also dismissed critics’ claims that Greene spends little time in the 14th Congressional District. She has taken heat for traveling around the United States promoting America First initiatives and campaigning for Trump-endorsed candidates like J.D. Vance in Ohio.

“She attends meetings and events, and visits with businesses and citizens, consistently—even when she is not up for re-election,” Tully said.

“This negative talk about her is just part of the movement from the Left and even some in the Republican Party to cancel voices who stand up for American values and aren’t worried about whether or not they will offend others.

“I’ll say this,” Tully added. “I remember a time years ago when I was told about the importance of voting, and how our freedom depends on it.

“Well, that time has arrived, and we need Marjorie Taylor Greene to keep representing us in Washington. We need strong America First candidates across the board representing us.”

The Democrats will face a tough challenge in the general election, regardless of whether Greene or Strahan wins the Republican primary.

U.S. Army veteran Marcus Flowers, who is known for wearing a cowboy hat, paced the Democratic field by raising more than $8.1 million.

If he defeats businesswoman Hollie McCormack and former Rome city commissioner Wendy Davis in the Democratic primary, Flowers will have a well-stocked chest of money for the general election.