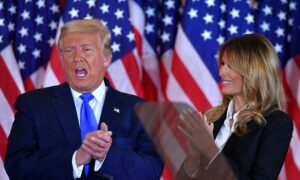 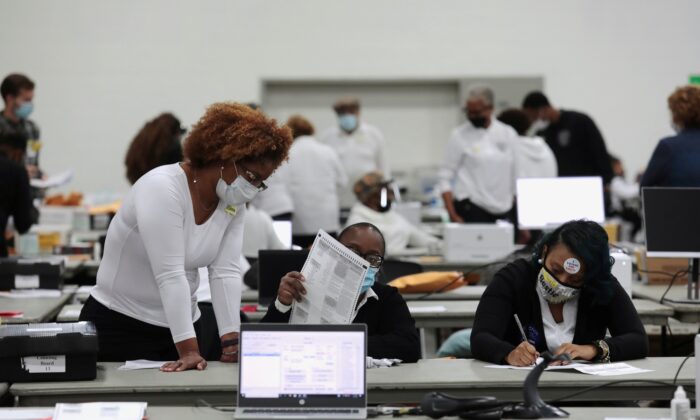 Voters across the United States say this year’s drawn-out election process has undermined their faith in the integrity of the system as the presidential race remains tight and tallies in key states continue to be counted.

Voters in the states of North Carolina, Oregon, New Jersey, Florida, and Pennsylvania told The Epoch Times they felt frustrated by the lengthy wait times—it could take days for some states—and concerned over mail-in voting mishaps or other potential ballot issues.

Some called for the country to transition to a nationwide voting system, arguing that the disparities between processes in different states or counties only further muddy the water. Others said they trust the election system but lamented poor organization in some counties.

“The process has been brutal and polarizing,” said Fabian Gordon, a business owner in Portland, Oregon, who voted by mail this year and in previous elections.

“I do not have faith in the integrity of the system,” he told The Epoch Times. “The states declared for Biden early were showing low percentages of reporting. But those for Trump were near 90 percent and still not declaring. Now, the amount of mail-in ballots are near all for Biden?”

State election boards should have worked harder to appear above reproach, according to Gordon, who said the current picture is “making us question all the processes of our government.” Some of Gordon’s friends in other states say they felt concerned they might have been disenfranchised.

“There is a lot of suspicion that the election has been rigged,” he said. “And this will add to existing tensions.”

In Pennsylvania, Carol Jacobs voted in person on Election Day at 7 a.m.

For her, the process went smoothly, but she believes a nationwide voting system would run more efficiently and would produce a winner on the night of the election.

“I think our political system as far as voting in the U.S. is very, very broken,” she told The Epoch Times. “There’s no reason that every state should have a different way to vote. Every state should be voting the same way.”

Jacobs, who is an advocate for voter ID, said she thought the mail-in-ballots push was strange.

She acknowledged it was likely due to the pandemic but noted that if people can go to the store, they can go out to vote.

“I’ve never seen anything like this when it comes to the pushing of mail-in ballots,” she said. “To say we have all these checks and balances—there’s too many ifs, ands, or buts in here. At this point in time in our country, after hundreds of years of voting, there should be no problems like this.”

Her son Kyle Jacobs, who is registered to vote in New Jersey, said when he got up to vote on Election Day, his location wasn’t prepared at all for people voting in person, and appeared to be only collecting mail-in ballot drop-offs.

According to Jacobs, he asked the officials if he could vote in person, after which they gave him a provisional ballot and didn’t ask for his driver’s license or address. He said he doesn’t have faith in the state’s voting system.

Meanwhile, President Donald Trump’s election campaign on Nov. 4 filed a lawsuit seeking to halt ballot counting in Michigan. The suit was filed in the Michigan Court of Claims and seeks to halt counting “until meaningful access has been granted” to Republican monitors, according to Trump campaign manager Bill Stepien.

Trump’s campaign earlier in the day said it was requesting a recount of Wisconsin’s vote after Biden appeared to win the state by a narrow margin. The president has said in recent weeks that he would file legal challenges to make sure votes were tabulated properly.

Ronnie Fish, a farmer who owns and operates Ronnie’s Berry Farm in North Carolina, said: “Everybody’s just so tired of the campaigning. I hope [election officials] do the right thing. It’s just going to be slow. We got to have patience.”

Fish didn’t see any issues when he voted in person weeks ago at a local church and said the entire process for him took about 10 minutes.

He did hear about different counties in the state having some issues with voting machines, but said he thinks the reports have been blown out of proportion by the media.

“Some of the news exploits some of it or makes it way bigger of an issue that it is instead of being calm, taking care of it, and moving on,” he said.

The fact that every state has its own system and there’s no centralized place to count votes is a good thing, according to Rey Anthony, a third-generation Cuban American and co-chair of the Cuban American Republicans of Florida.

“In Florida, we have absentee ballots, we have early voting, we have Election Day voting for years already,” he told The Epoch Times. “We are used to the system.”

“I definitely trust the process in Florida,” he added. “It was very clear, very simple, and very user-friendly. You can even track your absentee ballot and know when it arrived at the post office, whether it was counted or not.”

Michael Vaughan, an account executive at public relations firm HeraldPR, said he also trusts the integrity of the election process this year, even with the increase in mail-in ballots.

Vaughan voted in person in Florida, noting that many people in the state voted by mail due to a variety of reasons, including the pandemic, busy work schedules, overseas military service, and illness.

“States that have vote-by-mail have significantly higher participation rates,” he told The Epoch Times.