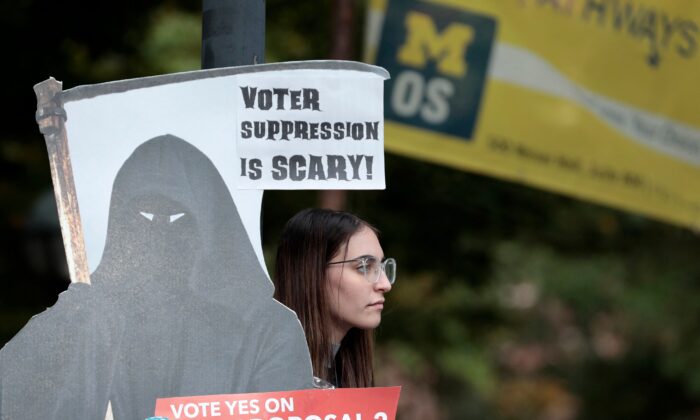 Voters in California, Vermont, and Michigan approved initiatives that make clear abortions must be available to many pregnant women while Kentuckians rejected a proposed constitutional amendment that would have led to less funding for abortions.

In California, Proposition 1 was approved by a strong margin. About 65 percent of the votes were yes with approximately 95 percent of precincts reporting as of early Nov. 9, according to California Secretary of State Shirley Weber.

The proposition alters the state constitution “to expressly include existing rights to reproductive freedom—such as the right to choose whether or not to have an abortion and use contraceptives,” voters were told.

Yes on Prop. 1, Protect Abortion Rights, which campaigned for the proposition, said that it would codify existing law into the state constitution and that it would safeguard abortion access “from future attacks, like those being made right now in other states across the country.”

Opponents of the initiative said it was extreme and enabled abortions up until birth even if there was no medical danger for the mother or baby, funded by taxpayers.

In Vermont, voters overwhelmingly approved Proposition 5, which will add to the state Constitution “That an individual’s right to personal reproductive autonomy is central to the liberty and dignity to determine one’s own life course and shall not be denied or infringed unless justified by a compelling State interest achieved by the least restrictive means.”

Nearly three-quarters of voters approved the proposition, according to Vermont Secretary of State Jim Condos.

“Vermonters support reproductive freedom in all four corners of the state, and they believe that our reproductive decisions are ours to make without interference from politicians,” the Vermont for Reproductive Liberty Ballot Committee, which backed the measure, said in a statement.

Vermonters for Good Government, which opposed the proposition, described it as “intentionally vague,” which would lead to “unintended consequences.”

Michigan voters approved Proposal 3, which states in part that “every individual has a fundamental right to reproductive freedom” and that the right “shall not be denied, burdened, nor infringed upon unless justified by a compelling state interest achieved by the least restrictive means.”

About 52 percent of voters approved the constitutional amendment, according to Michigan Secretary of State Jocelyn Benson.

The vote means the state cannot restrict abortions if they are deemed necessary for a woman’s “life or physical or mental health.”

A proposed constitutional amendment in Kentucky was rejected by voters.

Constitutional Amendment 2 would have added to the state Constitution the words, “To protect human life, nothing in this Constitution shall be construed to secure or protect a right to abortion or require the funding of abortion?”

If voters adopted the amendment, they would make clear “there is no constitutional right to abortion or taxpayer funding for abortions, and that the General Assembly may decide, based on public input, when abortion is legal,” Kentucky Attorney General Daniel Cameron said in an advisory.

Approximately 52.5 percent of voters voted no, with 89 percent of votes counted as of Wednesday morning. The Associated Press called the vote overnight.

“This is a historic win for the people of Kentucky,” Rachel Sweet, campaign manager for Protect Kentucky Access, said in a statement.

“Not only does it represent a win against government overreach and government interference in the people of Kentucky’s personal medical decisions, it represents the first time so many different organizations have come together with such an intense single-minded purpose to defeat a threat of this magnitude,” she added.

Yes for Life, a group advocating for the measure, said it was “devastated that radical, out-of-state activists spent millions of dollars to confuse Kentuckians about the Yes for Life Amendment” but that the count “will not stall the prolife movement.”

Montana voters also voted on a measure that would provide that infants born alive, including after an abortion, “are legal persons” and that healthcare workers were required “to take necessary actions to preserve the life of a born-alive infant.”

As of Wednesday morning, the majority of the votes counted—52 percent of the 80 percent counted—were against the measure.