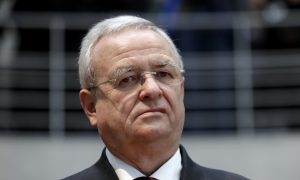 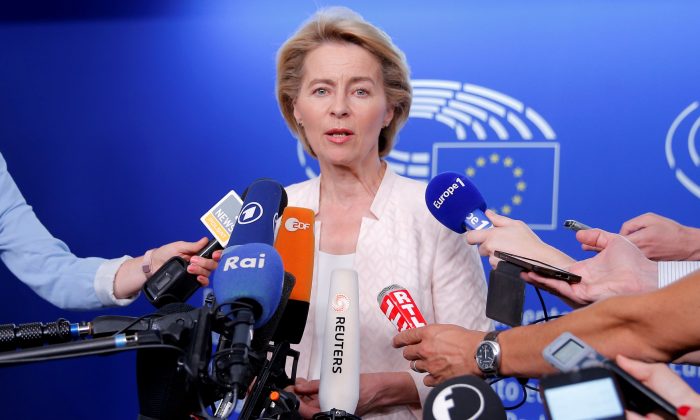 German Defense Minister Ursula von der Leyen, who has been nominated as European Commission President, attends a news conference during a visit at the European Parliament in Strasbourg, France, July 3, 2019. (Vincent Kessler/Reuters)
Europe

BRUSSELS—Germany’s Ursula von der Leyen made her pitch to European lawmakers on July 11 to be the next head of the EU executive, promising to focus on promoting the rule of law, digitalization, competitiveness, with a progressive climate policy at the heart of her program.

The conservative German defense minister has to win over deputies who are annoyed that national leaders last week nominated her over candidates proposed by political groups in the new parliament after May’s EU-wide election.

The prolonged negotiations to secure the votes needed to confirm her appointment have highlighted the increased fragmentation of the European Parliament since the election.

In her first public policy comments since being nominated, von der Leyen said the EU needed to be strong and united, as it contends on the global stage with a rising China and an assertive Russia.

“The EU is based on principles. This is the foundation—respect for the rule of law,” she told a group of liberal deputies, adding that it was also vital to boost the competitiveness of the EU’s economy.

The European Parliament is due to vote on her candidacy next week. Von der Leyen needs the backing of an absolute majority of 376 votes in the 751-strong chamber to get confirmed as president of the European Commission.

She wholeheartedly supported the EU going carbon neutral by 2050 and said the bloc should harvest economic benefits of environmentally-friendly policies.

She also said the EU needed to advance single market reforms, invest in joint defense capacities that would complement those of NATO and “become more assertive.”

Von der Leyen, a 60-year-old former gynecologist and mother of seven, switched between English, French and German as she spoke in favor of enlarging the eurozone and the EU’s open-border Schengen area, provided countries meet the criteria.

She said the EU should also be ready to take in Western Balkan countries.

Von der Leyen promised to be tougher on the rule of law than the outgoing Commission and to reform the EU’s failed asylum system – both areas where liberal, wealthy western Europe and the post-communist east differ bitterly.

On Brexit, she hoped Britain would remain in the EU but, otherwise, she said it was essential that the divorce did not poison the chances for good future cooperation between the bloc and London.

She said the Irish border “backstop”—which aims to avoid border controls between EU member Ireland and British-governed Northern Ireland after Brexit—was “precious, important and has to be defended” in any Brexit deal.

Smooth cooperation between the Commission, the Parliament, and member state governments is essential to EU policy-making on everything from trade to migration to climate.

Von der Leyen declared her readiness to take lawmakers’ ideas on board as different members of the parliament named their price.

So far, von der Leyen can count on the conservative European People’s Party (EPP), who have 182 seats in the assembly, and most likely the liberals, who have 108 lawmakers. But she needs more votes and some could come from the Socialists, the second largest grouping in the parliament.

She could also seek support from among the Greens and eurosceptics in the assembly, who have different and often contradictory expectations of her as the new Commission chief.

The risk is that any promises she makes to win more votes could confuse future EU policies. Failing to secure enough support would force an embarrassing delay or possibly even push EU states to look for another candidate.

Should she succeed, von der Leyen said she wanted a gender balance at the Commission and that Dutch Socialist Frans Timmermans would be her first deputy along with Danish liberal Margrethe Vestager, now the EU’s competition chief.

The Commission is a pivotal EU institution with a wide range of functions that include proposing laws, policing member states’ budgets, and negotiating trade deals around the world.