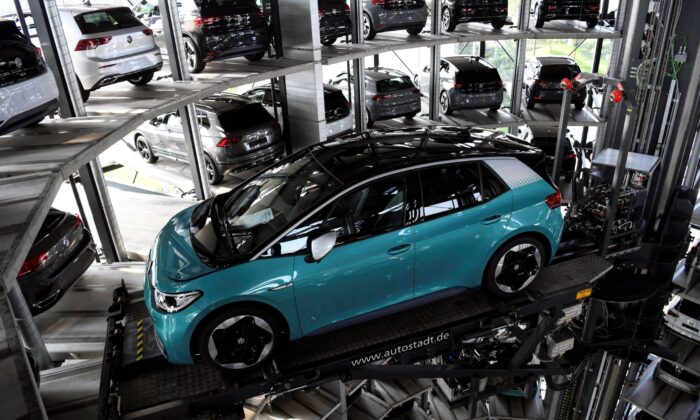 A new Volkswagen ID.3 electric car in a fully automatic high-bay-rack for delivery by the German automaker at the "Autostadt" in Wolfsburg, Germany, on Sept. 11, 2020. (Annegret Hilse/Reuters)
Companies

German vehicle manufacturer Volkswagen has said it does not anticipate chip shortages ending in 2023 and is instead gearing up for a “new normal” of supply-chain disruptions.

Murat Aksel, head of procurement on the Volkswagen board, gave the bleak outlook in an interview with the German weekly Automobilwoche.

Aksel said that while the situation has improved somewhat, and “investments for new capacity are now on track,” there likely will “still be a structural shortfall in semiconductors up to and including 2023.”

Aksel noted that “it’s a structural issue that can’t be solved so quickly” and that it will take “years” to build up new capacities.
While the company anticipates chip shortages to extend beyond next year, the supply of wire harnesses is stable again, Aksel said.

The wire harnesses, which are made in Ukraine, had been in short supply since Russia’s invasion of Ukraine in February. However, Volkswagen “stood by” its suppliers in Ukraine, while simultaneously “setting up backup locations in other countries,” Aksel said.

Aksel warned, however, that if the situation in Ukraine were to deteriorate further, the backup locations may be needed to produce them.

Further supply-chain issues may still lie ahead, he added, which will create an even more challenging environment.

“What we’ve seen in the supply chains over the past two years is this is the new normal,” he said. “And with the new geopolitical issues, it’s becoming even more complex and challenging.”

Due to this, Volkswagen is investing heavily in detecting such problems early on, Aksel said.

The global chip shortage, initially prompted by increased demand during the COVID-19 pandemic and supply-chain issues, has been further exacerbated by skyrocketing inflation. The shortage also resulted in multiple companies cutting back on production in the United States and elsewhere.

Back in March, Cox Automotive lowered its full-year new-vehicle sales forecast, from 16.0 million to 15.3 million.

Meanwhile, the shortage cost the European automotive industry an estimated €100 billion ($99 billion) in 2021–22, insurer Allianz said in a study published on Sept. 13.

“The global automotive chip shortage has created a shortfall of 18 million vehicles,” the study states. “The situation has been comparatively worse in Europe, where, unlike in China or North America, vehicle production fell to an unprecedented low of 13 million vehicles in 2021.”

In an interview with Reuters on Sept. 19, Martin Daum, Daimler Truck’s chief executive, said the vehicle makers’ deliveries could have been higher by a “five-digit figure” in 2021 and 2022 if it weren’t for such supply-chain issues.

However, Daum said that demand in the truck market has not declined and that order books were filling up fast, meaning the company was able to pass higher costs on to customers, allowing it to recover margins lost in the pandemic by 7–9 percent.