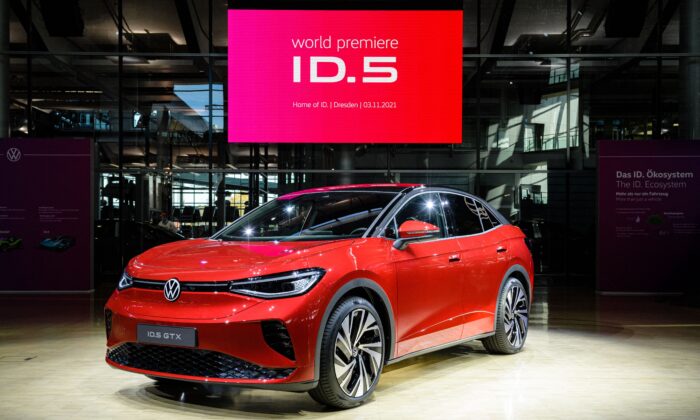 A Volkswagen ID.5 electric car is on view at the show room of German car maker Volkswagen (VW) in Dresden, eastern Germany, on Nov. 3, 2021. (Jens Schlueter/AFP via Getty Images)
Businesses in COVID-19

Volkswagen (VW) said on Feb. 16 that it expects auto production to slow down due to a continued shortage of semiconductor chips in 2022, but that it should be able to ramp up production in the second half of the year.

Automakers around the world have been hit by a shortage of semiconductors caused by CCP virus-induced supply-chain disruptions, as well as a skyrocketing demand for chips at electronic manufacturers.

In early February, Volkswagen said that night shifts at Wolfsburg would be cut on some production lines due to the lack of semiconductors and that capacity adjustments would also be needed in the medium term.

Volkswagen had produced 330,000 fewer vehicles than originally planned at the Wolfsburg plant last year due to the shortages, with just under 400,000 vehicles rolling off the production line.

As a result, VW was forced to reduce production forecasts for 2022 after it cut down its 2021 predictions from 9.3 to 9 million vehicles produced, reported City A.M.

“The supply situation is getting better but even in 2022, we will not be able to build all the cars we could sell. But we see opportunities for further production increases, especially in the second half of the year,” Volkswagen Chief Executive Herbert Diess said.

However, the CEO’s comments came a few days after Murat Aksel, a Volkswagen board member and the head of procurement, told German car magazine Automobilwoche in early February that the German automotive maker was not yet out of the woods.

“We must continue to fight for every part,” Aksel said, who commented that ongoing chip shortages would plague production “beyond the first half of this year.”

Although the supply chain crisis might ease in the second half of the year, structural problems would make further predictions inaccurate until 2023, according to Aksel.

The supply of chips is the only major challenge facing VW at the moment, Diess said, as top models of its premium brands have already sold out for the whole of 2022, while its truck businesses also have fully filled their order books.

The Volkswagen CEO hopes to increase production in the second half of 2022, but despite the more positive outlook, he expects production in 2022 to be significantly lower.

“The supply situation is getting better, but even in 2022 we will not be able to build all the cars we could sell,” Diess added.

Volkswagen announced in 2021 that it would build a new state-of-the-art car factory close to its headquarters in Wolfsburg, Germany, as a challenge to the American electric vehicle maker, Tesla, which is building an auto plant near Berlin.

The auto company will decide on where to build its new electric vehicle plant at the end of March.

Volkswagen’s Trinity project, the company’s flagship electric sedan model, is expected to be manufactured at its main Wolfsburg plant starting in 2026.

The VW Works Council, the company’s auto union, hopes that the new production line will secure the Wolfsburg plant’s future, as Volkswagen prepares to cease the manufacture of traditional combustion engine vehicles in Europe from 2035.

“We are fighting for Trinity production right here in Wolfsburg,” said Daniela Cavallo, the VW union head. “[W]e will carry on being the leading plant for the whole Volkswagen Group here in Wolfsburg. This is where we set the direction for the company.”

Volkswagen’s share price had tumbled in the last quarter of 2021, but partially recovered in recent months, rising slightly on today’s announcement.