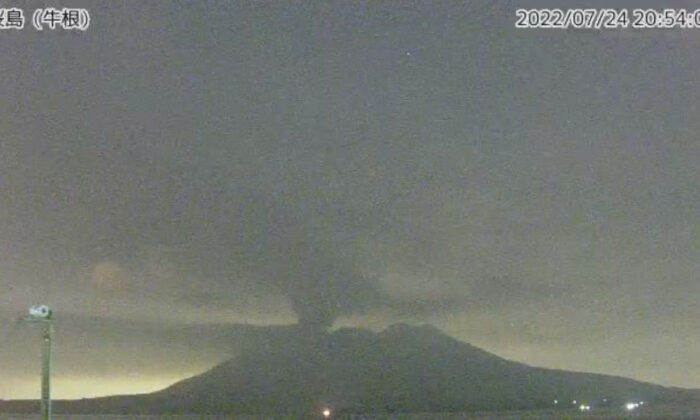 TOKYO—A volcano on Japan’s major western island of Kyushu erupted on Monday morning, with authorities issuing their highest level alert of 5 for the mountain.

There have been no immediate reports of damage and some areas have been advised to evacuate.

The volcano, which is called Sakurajima and is located on the southern tip of Kyushu near the city of Kagoshima, also erupted on Sunday night, the Japanese Meteorological Agency (JMA) said.

Volcanic stones rained down at a distance of 2.5 km (1.5 miles) from the volcano, a JMA official said.

Sakurajima is one of Japan’s most active volcanoes and eruptions of varying levels take place on a regular basis. In 2019 it spewed ash 5.5 km (3.4 miles) high.

Nuclear regulators said Sunday there were no irregularities detected at the Sendai atomic plant, which lies about 50 km (31 miles) from the volcano.

Video footage showed what appeared to be a red mass flowing down one side of the volcano, with red projectiles shooting upwards.

Most of the city of Kagoshima is across the bay from the volcano but several residential areas within about 3 km (1.9 miles) of the crater may be ordered to evacuate depending on the situation, NHK said.

It later reported that 51 people in the vicinity were being evacuated.