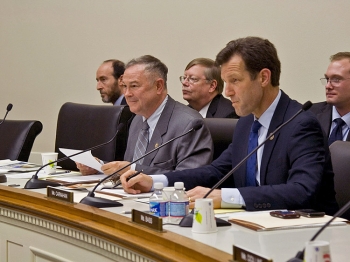 VOA Cuts Back on China Broadcasts

By Andrea Hayley
Print
WASHINGTON—They say that online is the way of the future, that record numbers of Chinese are plugging in, and that traditional short-wave radio broadcasts are losing relevance.

Based on this set of assumptions, the Broadcasting Board of Governors (BBG), which is the U.S. body that overseas U.S. international broadcasting, has concluded that continued funding for Voice of America (VOA) Mandarin and Cantonese radio and television broadcasting can no longer be justified.

Under the proposed changes, 45 Chinese broadcasters will be cut, leaving just 24 staff for the Chinese digital services. A total of 90 hours of radio and television programs in Chinese every week will come to an end.

The BBG’s plan is to strengthen VOA’s online and digital services. Some of the station’s prime time slots will be given to Radio Free Asia (RFA), which will continue its China broadcasts.

The savings from these cuts amount to $8 million of a total $767 million budget request for 2012. The overall request is up almost $20 million from this year.

BBG’s change in strategy is based on questionable survey results that found few Chinese tuning into VOA.

During questioning at a House Foreign Affairs Subcommittee on Oversight and Investigations on Wednesday, BBG board member Enders Wimbush and others conceded that calling up Chinese people and asking them if they listen to illegal radio broadcasts, is not likely to yield reliable data. Being caught listening can result in arrest and almost certain torture for Chinese nationals.

The Chinese government jams American broadcast signals, and has blocked all attempts by VOA and RFA to gain official access into China. Nonetheless, Chinese people for generations have turned to VOA for accurate news and information.

The BBG’s cuts to VOA will end popular programs that have been running since 1942.

“VOA has always had certain programs that were very popular. If those programs are not taken up by RFA, you are going to loose them,” said Arch Puddington, director of research for Freedom House.

Former VOA director Robert Reilly is very concerned about VOA’s loss of reach in China, which he says follows on a pattern of cutting language services, and diminishing the strength of these services year after year. He said only VOA has the unique mission of telling the public “who we are, what we are doing, and why.”

“Given how tyrannical the Chinese government is, and how blatantly opposed to democracy, especially in the media, it has become, I view these cuts as a loss for the Chinese people,” said Barney Warf, a professor with the University of Kansas, specializing in Internet freedom.

RFA, and other stations like RFE and Radio Liberty stations, cannot replace the unique mission of VOA, since their work is different. It is focused on providing fair and accurate news alternatives to other local media channels, Reilly said.

Broadcasting remains one of the most important instruments of U.S. foreign and national security policy, said John Lenczowski, president of the Institute of World Politics, an independent graduate school of national security and international affairs based in Washington, D.C.

It is an essential complement to reach those who do have access to digital media, and right now it is underfunded, lacks appropriate oversight, and lacks national strategic attention, Lenczowski said at the hearing.

The government needs to seriously address its public policy approach, revive its loss of mission, and return to explaining U.S. policies to people in other countries so that they can understand our reasoning, said Reilly.

“Failure to do this will be paid, I am afraid, in American lives. Better to win the war of ideas, than have to win a war. That is simple economics,” he said.

Next: Banking on the Internet