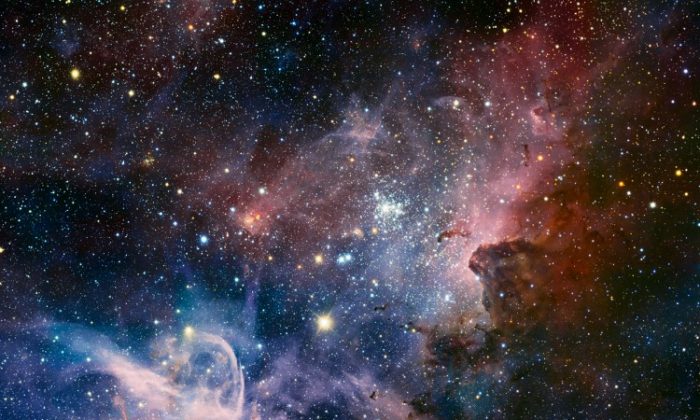 This broad panorama of the Carina Nebula, a region of massive star formation in the southern skies, was taken in infrared light using the HAWK-I camera on ESO’s Very Large Telescope. (ESO/T. Preibisch)
Science

The most detailed infrared image of the Carina Nebula, a star-forming region in the Milky Way, has been captured by the European Southern Observatory’s (ESO) Very Large Telescope (VLT), revealing numerous previously unseen objects.

This cloud of dust and gas lies approximately 7,500 light-years away from Earth, and is home to some of the brightest and heaviest known stars, such as Eta Carinae, making it popular with astronomers for studying stellar evolution.

Eta Carinae can be seen in the bottom left corner of the image, enveloped in gas clouds that are glowing due to the luminous hypergiant’s intense ultraviolet radiation. New regions of star formation appear as dusty dark blobs that cannot be pierced even by infrared.

Though shrouded by thick clouds in visible light, the VLT’s powerful vision combined with the infrared-sensitive camera, HAWK-I, has exposed many features that have never been seen before, such as the small group of yellowish stars to the left of the picture.

Near the image center is the Trumpler 14 star cluster with many fainter stars apparent, which cannot be seen in visible light.