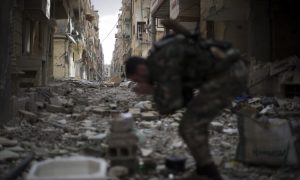 Syrian War Criminals Should be Investigated by ICC, UN Says
0 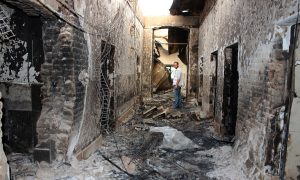 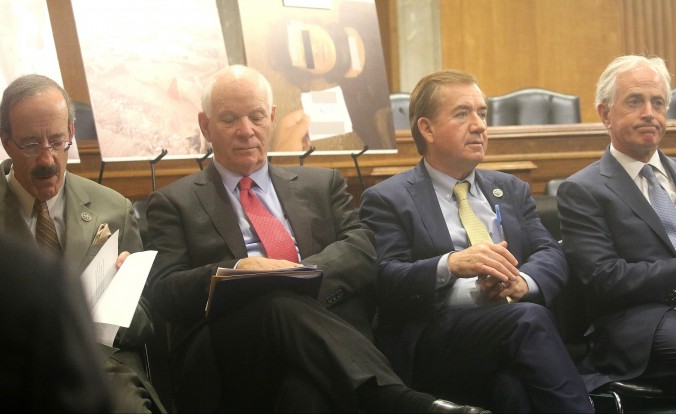 WASHINGTON—The war in Syria is six years running with its heavy toll of death and suffering for the Syrian people. To make the world aware of the carnage, and incensed that the Bushar al-Assad regime commits crimes against humanity as the world looks on, the United States Holocaust Memorial Museum  sponsored a commemorative event, “Inside Syria’s Torture Machine,” at the Dirksen Senate Office Building, March 21, on Capitol Hill, “to recognize the atrocities and crimes against humanity suffered by Syrian civilians.”

The museum was joined by the U.S. Senate Committee on Foreign Relations and U.S. House of Representatives Foreign Affairs Committee, in an expression of bipartisan and bicameral unity. The event included a display of a few photos taken by a former Syrian military police photographer that provide graphic evidence of the culpability of the Assad regime. He smuggled a total of 55,000 photographs out of Syria over a period of two and a half years. To protect his identity, the photographer is called “Caesar.”

The photos show the torture marks of prisoner bodies and other displays of the regime’s inhumanity. The few photos shown at this commemoration were first displayed at the Capitol two years ago.

“He risked his life to reveal the brutality the regime was inflicting on innocent men, women, and children,” said Cameron Hudson, director of the Holocaust Museum’s Simon-Skjodt Center for the Prevention of Genocide.

Almost three years ago, in July 2014 before the House Committee on Foreign Affairs, Caesar had testified, “I have seen horrendous pictures of bodies of people who had tremendous amounts of torture, deep wounds and burns and strangulation.”

The speakers at the commemoration referred to the atrocities committed by the Assad regime. A good summary of these is contained in House Resolution 5732, introduced by Rep. Eliot Engel (D-N.Y.), which was passed in the House on Nov. 15 and referred to the Senate. It states that the Assad regime attacked vulnerable populations, “through the use of barrel bombs, chemical weapons, mass starvation campaigns, industrial-scale torture and execution of political dissidents, sniper attacks on pregnant women, and the deliberate targeting of medical facilities, schools, residential areas, and community gathering places, including markets.”

I have seen horrendous pictures of bodies of people who had tremendous amounts of torture, deep wounds and burns and strangulation.
— 'Caesar' (alias), forensic photographer, Assad regime's military

Senator Ben Cardin, Ranking Member of the Senate Committee on Foreign Relations, mentioned the targeting of hospitals and convoys bringing medicines and that there had been 13,000 extra-judicial killings, according to Amnesty International. “These are war crimes,” he said.

Syrian War Criminals Should be Investigated by ICC, UN Says

“For six years the Syrian people have been targeted as part of a military campaign. That is outrageous and cannot be allowed to go on unchallenged,” he said.

Engel said that Caesar’s photos reminds us that we should not become complacent in the face of this tragedy. “These images are seared on my mind and soul,” he said, and that we should not say that there is nothing that we can do. “There is plenty we can do,” said Engel.

Holocaust survivor and Holocaust Museum volunteer Al Munzer focused on the Syrian children which he could relate to because he had been a 9-month-old Jewish baby hidden from the Nazis. Children are burned, maimed, and orphaned by bombs in Syria, he observed. “Their plight must be front and center of this country’s foreign policy and of the world’s attention. Like in the Holocaust, inaction is to be complicit.”

Like in the Holocaust, inaction is to be complicit.
— Al Munzer, Holocaust survivor

House Committee on Foreign Affairs Chairman Edward Royce (R-Calif.) said the tens of thousands of executions and torture was done on an “industrial scale,” adopting the same words that Hudson and the House resolution used. The images from Caesar’s photos provided “irrefutable evidence” of the atrocities occurring in Syria, he said.

Royce mentioned his father who was in General Patton’s Third Army at the time of liberation of the Nazi concentration camps, when the world could finally see the death camps. Young people asked his father after the war, why were people asleep as to what was going on? His father explained that there was no visual evidence at the time.

“That’s why Caesar ran that risk, so visual evidence would be right here in front of us,” Royce said. For today, to explain the world’s inaction in preventing the atrocities in Syria, “What is our excuse?”, he asked.

The importance of Caesar’s images was also underscored by Naomi Kikoler, from the Holocaust Museum, who said that the photos will be useful in the future for bringing justice to the guilty.

“Those images help set the historical record of what happened, to counter those who would deny that civilians have been the target and victims of Assad’s atrocities.”

All the speakers either implicitly or explicitly faulted the United States and the International community for not somehow stopping the atrocities and alleviating the suffering.

“The world is going to look at the United States and the Western world in not a good light. We are going to be judged by what we have not done,” said Senate Committee on Foreign Relations Chairman Bob Corker.

“Until we bring Assad to justice, until we make sure people like Assad who commit atrocities are brought to justice, our job is not done,” he said.

There was a time where our country with others could have kept much of this from happening.
— Bob Corker, chairman, Senate Committee on Foreign Relations

In an indirect criticism of the Obama administration, Corker said, “There was a time where our country with others could have kept much of this from happening.”

More direct in his criticism was Syrian survivor Qutaiba Idlibi, a native of Damascus, who was detained twice by Syrian internal security services soon after the protests began in 2011. He was fortunate in surviving his detention and in fleeing Syria. He named several Syrians who were detained and killed under torture and others whose lives were in peril in prison. Then he read a statement from Caesar, himself, with whom he is in contact.

Caesar said that three years ago when he came to the U.S. to bear witness to the torture and killings of innocents, he had “high hopes and dreams” that that it would be sufficient to “stop the machinery of death in my country.”

“Unfortunately, President Obama failed us, and betrayed the blood of our victims,” Caesar said in the message read by Idlibi. Caesar made the challenge, “I stand here once more to ask you, how many Syrians must die before the United States and the International community can stand up for those oppressed.”

Caesar message said that we often heard during the past six years, “Never Again,” while “we watched blood continue to spill.” The rallying cry, “never again” refers to the resolve and solemn pledge that emerged from lessons of the Jewish Holocaust.

Caesar said that the U.S. policy fails because it only views the Syrian situation as about fighting ISIS, Iran and Iran’s agent Assad. It doesn’t recognize the Syrian people. “The blood is being spilt only because the past administration turned its back on our humanity.”