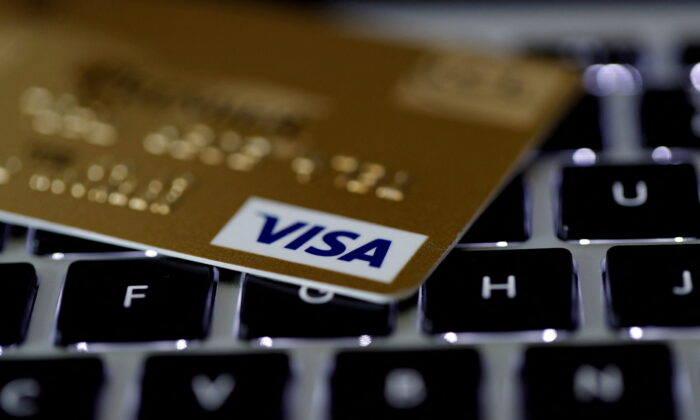 A Visa credit card is seen on a computer keyboard in this picture illustration taken on Sept. 6, 2017. (Philippe Wojazer/Illustration/Reuters)
Companies

While travel spending has stalled since late December due to the Omicron variant of the coronavirus, Visa executives said they believe the recovery will resume and net revenue will grow in the second fiscal quarter this year.

“The upside is going to come from the continued recovery of travel and the affluent customer getting back in the mix of spending at the levels they were pre-pandemic,” Visa Chairman and Chief Executive Alfred Kelly said on a call with analysts.

The world’s largest payments processor reported transactions rose 21 percent to $47.6 billion during the quarter compared with a year earlier.

Cross-border volumes rose 40 percent, marked by a steep increase in travel between September and November when the U.S. border and most of the borders within Europe reopened.

Visa’s chief financial officer, Vasant Prabhu, said that even if countries reinstate border closures this year due to new COVID-19 variants, spending appears to rebound quickly when consumers can travel.

“[Open borders] can have a sizable and immediate impact,” Prabhu said. “Our assumption is for steady improvement through the year.”

Shares rose by as much as 2.5 percent in after-hours trading following the company’s results.

Net revenue rose to $7.1 billion in the three months ended Dec. 31, an increase of 24 percent over the prior year.

Analysts, on average, had estimated net income of $1.70 per share, according to IBES data from Refinitiv.