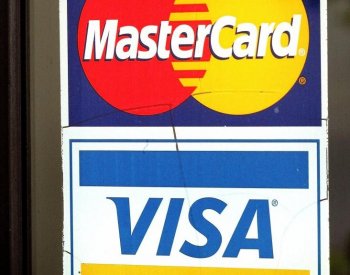 Visa and Mastercard settled an antitrust suit with the US Department of Justice on Monday. (Tim Boyle/Getty Images)
Business & Markets

Tara MacIsaac
​​Tara MacIsaac is an editor and reporter who has worked on a variety of topics over the course of her 10 years with The Epoch Times, including science, the environment, and local New York news. She is currently working with The Epoch Times edition based in Southern California.
View profile
Follow
biggersmaller
Print
Visa and MasterCard settled an antitrust suit on Monday, which American Express is still fighting. The US Department of Justice (DOJ) first laid the charges against the credit card companies two years ago.

Merchants are charged a fee whenever a customer swipes one of these cards. The DOJ opposed the companies’ regulations on merchants, which prevent them from encouraging consumers to use forms of payment with lower fees.

The Mastercard and Visa settlement, though still subject to court approval, will allow merchants to promote discounts, providing information about the fees and their effect on sales prices.

"Visa always has allowed merchants to discount for cash and PIN-debit, and extending the ability to discount by network brand is a reasonable accommodation, commented Josh Floum, General Counsel for Visa, in a press release.

“The settlement will not impact our ability to continue growing our business by offering innovative payments products that consumers and merchants value above any others,” he added.

Meanwhile American Express claims settling with the DOJ, like MasterCard and Visa, would limit consumer choice. The company says the customer would be steered away from American Express at point-of-sale and has not intention of settling the case.

“We will defend the rights of our cardmembers at the point of sale and our own ability to negotiate freely with merchants,” said Kenneth Chenault, Chairman and Chief Executive Officer for American Express.

“We are confident that the courts will recognize the perverse anti-competitive nature of the government’s case and that we will continue providing a competitive, superior service to cardmembers and merchants,” he added.