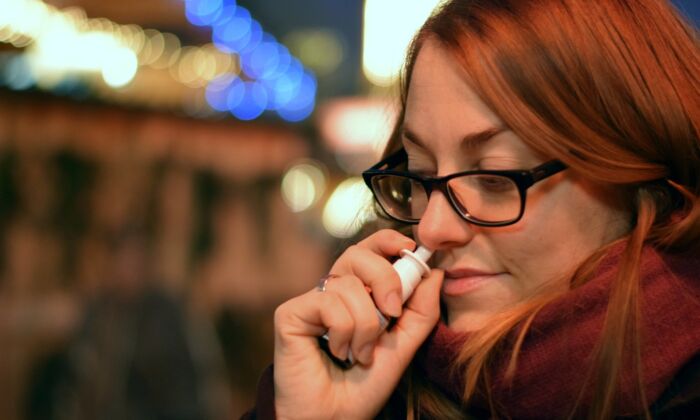 A battle is on in the courts over whether certain nasal sprays can be used as a treatment, or preventative, for COVID 19. (Thorsten Frenzel/Pixabay)
Australia

Virucidal Spray for the Common Cold to Be Listed on ASX

An Australian pharmaceutical firm that is developing the first virus-killing nasal spray for colds is set to be listed on the ASX on Jan. 28.

Firebrick Pharma co-founder Peter Molloy said he’s been working on the spray, Nasodine, for almost ten years as a treatment for the common cold.

“It appeared to me that if you could kill the viruses that are present in the nose, you could intervene in the course of the common cold and stop it spreading in the body and to other people,” he said.

Common colds can be caused by about 200 viruses, therefore a nasal spray that targets all causes of common colds require a broad-spectrum treatment, Molloy said in a video.

The spray is based on povidone-iodine, the same active ingredient found in Betadine throat gargle, which Molloy developed earlier in his career.

A usual concern for broad-spectrum treatment is that it can cause resistance within germs, however Molloy said that it should be next to impossible for germs to develop resistance because the solution kills all respiratory viruses mostly within 60 seconds.

A video on Firebrick Pharma’s website states that the treatment has been shown to kill all viruses it has been tested against, including seasonal coronaviruses that cause the common cold, and SARS-Cov-2, which causes the COVID-19 disease.

But Molloy cautioned that there is no published evidence yet that it could be effective in the real world against COVID-19. That said, his company is conducting research for the solution’s potential uses against pandemic viruses, such as SARS-CoV-2.

If the Therapeutic Goods Administration approves the drug this year, it will be manufactured in Melbourne by the company Probiotech, and should by on pharmacy shelves in 2023.

Molloy said that Nasodine had yet to undergo a second round of phase three clinical trials with the trial planned to commence in early 2022. The trial is aimed at securing approval for treatment of the common cold and Nasodine is therefore not yet approved for sale in Australia.

“Testing and demonstrating in a lab is far removed from establishing clinical efficacy,” he said.

Nasal sprays that treat COVID-19 have been pushed out previously. One that has been marketed recently for killing COVID-19 viruses is VirX, also branded as enovid.

A peer-reviewed study, funded by SaNOtize and conducted by an external virology lab in the United Kingdom, was published by the Journal of Infection and showed that the enovid spray could indeed reduce the COVID-19 viral load.