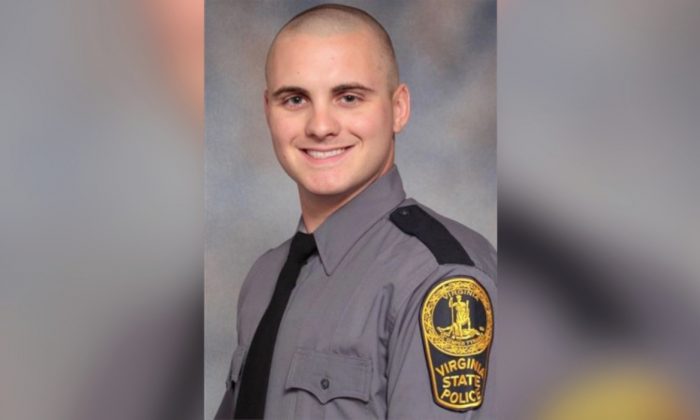 Virginia State Police are mourning the loss of a trooper killed during a narcotics investigation. While executing a search warrant, a male suspect fired at officers as they entered the home—fatally wounding Trooper Lucas B. Dowell on Feb. 4.

“This is an extremely difficult day for the State Police,” stated Virginia State Police Col. Gary T. Settle in a press release. “We are humbled by Lucas’s selfless sacrifice and grateful for his dedicated service to the Commonwealth.”

The 28-year-old trooper served Virginians for four years. As a member of the Appomattox Division Tactical Team—”the equivalent to a SWAT team”—he assisted the Piedmont Regional Drug and Gang Task Force at the time of the shooting. Two other troopers returned fire at the suspect, resulting in his death, according to the press release.

Sympathy and condolences for the officer were posted on Facebook.

A black mourning band was also posted a day after the incident.

Dowel was the only trooper who sustained injuries while executing the warrant. Dowell was then treated at the Southside Community Hospital in Farmville but later succumbed to his wounds. It was not specified how many times Dowell had been shot, or where.

According to the release, the suspect’s remains were sent to be examined and autopsied, and the police are in the process of notifying his family of his death. No other suspects were found in the home.

Dowell was added to the Officer Down Memorial Page, where the pages are dedicated to deceased officers, troopers, sheriffs, and border patrol agents from all states. K9s are also commemorated.

“He will forever be remembered by his State Police Family for his great strength of character, tenacity, valor, loyalty, and sense of humor,” said Settle.

In Virginia, a total of 515 people and K9s have died in the line of duty since 1830, according to the Officer Down Memorial Page. Two hundred and eighty-two of those deaths resulted from gunfire, and 64 were the result of automobile crashes.

Last year, only K9 Vader from the Virginia State Police was killed during a gunfight involving a man who murdered one woman and wounded another. A round shot by man pierced the trooper’s car, striking Vader in the backseat compartment. Vader was two years old, and was part of the narcotics task force.

On top of being a Marine Corps veteran, Special Agent Michael Walter was a state trooper for 18 years before he was shot during the investigation of a parked car. The passenger responsible for shooting Walter was arrested several hours later and ultimately sentenced to 36 years in prison.