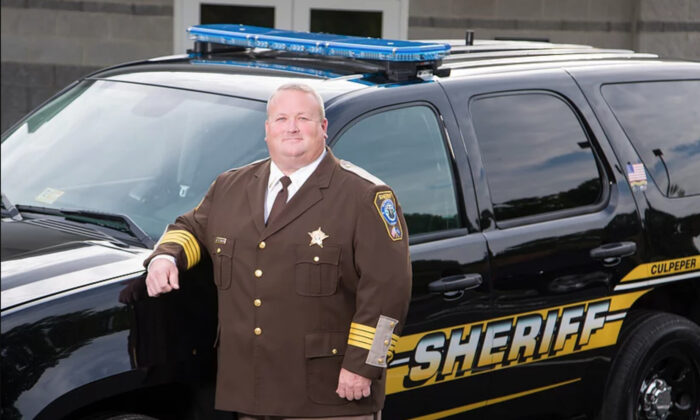 As a majority of local counties in Virginia are declaring themselves “Second Amendment sanctuaries,” a direct response to a new push by Democrats to pass stricter gun control measures, one of the state’s county sheriffs says he’ll “deputize citizens” as auxiliary deputies to protect their constitutional right to bear firearms.

Officials in Second Amendment sanctuaries generally state that they won’t follow new gun laws they believe are unconstitutional. Over 70 of the 95 counties in the state have declared or adopted some form of sanctuary policy, as of Dec. 18.

Local leaders and an increasing number of sheriffs argue that gun control measures proposed by Democrats, which could be approved by the state legislature as soon as next year, are unnecessary and overreaching.

“To be short, there is no need for further gun restrictions,” Culpeper County Sheriff Scott Jenkins told The Epoch Times. “The proposed laws that are designed to supposedly restrict criminal activity, in fact, will only impact law-abiding citizens.”

While Jenkins said he had taken a strong stance by announcing his willingness to deputize citizens, he said he hopes the legislature will work to reach sensible solutions.

“I plan to properly screen and deputize thousands of our law-abiding citizens to protect their constitutional right to own firearms,” Jenkins wrote in a Dec. 4 Facebook post, if Virginia’s General Assembly passes the proposed bills.

In early December, Culpeper County’s Board of Supervisors voted 7–0 to affirm itself as a “constitutional County,” sparking a standing ovation by residents present for the vote. Jenkins lauded the leadership for making a public statement showing that the county supports citizens’ rights to defend themselves.

The move to create Second Amendment sanctuaries gained momentum after both houses of the state legislature recently gained a Democratic majority. The newly elected legislature began discussing several proposals, including a ban of “assault-style” rifles and high-capacity magazines, as well as raising the minimum age to buy a rifle or shotgun from 18 to 21, according to Dick Saslaw, the top Democrat in the state Senate.

Jenkins said the gun restriction proposals “shook the core of conservative and libertarian groups throughout the commonwealth.” He described the legislature’s proposals as “a far-left agenda that continues to be pushed throughout our country.”

Aside from the counties, there are also a number of independent municipalities in Virginia that have become sanctuaries.

“I think [local officials] are fully awake now and have become laser-focused on the goal of stopping this government overreach and restriction of our constitutional rights,” he said.

About 287 miles away from Culpeper lies Tazewell County, whose board voted to declare the county a Second Amendment sanctuary on Dec. 3 and also approved a separate resolution emphasizing the right to form a militia, as described in the U.S. Constitution and in the state’s constitution.

Tazewell’s board is made up of three Democrats and two Republicans. Both resolutions passed unanimously.

Under Article I, Section 13, of Virginia’s Constitution, it states, “That a well regulated militia, composed of the body of the people, trained to arms, is the proper, natural, and safe defense of a free state, therefore, the right of the people to keep and bear arms shall not be infringed; that standing armies, in time of peace, should be avoided as dangerous to liberty; and that in all cases the military should be under strict subordination to, and governed by, the civil power.”

Jenkins said he was “pleasantly surprised” by the growing number of Virginia counties that have joined what he described as an “organic movement.”

“[It] sends a message to Richmond [Virginia’s capital] that the majority of our commonwealth would like the laws to remain as they are and not further restrict and punish our law-abiding citizens,” he said.

Jenkins said he’s aware of reports saying that some Virginia counties are discussing whether to establish militias; he said that isn’t something that he’s discussed or given any consideration.

He said the state legislature should direct its focus and energy toward mental health issues and other social problems that are “the core of these [shooting] incidents.”

“These [gun] restrictions will do nothing to stop a person that is hellbent on evil, and killing innocent people,” Jenkins said.

In response to the rising number of Second Amendment sanctuaries, a U.S. House Democrat floated the idea that Virginia Gov. Ralph Northam could direct the state’s National Guard to help enforce the proposed gun restrictions. Northam is also a Democrat.

Rep. Donald McEachin (D-Va.) made the proposal on Dec. 11, while also suggesting cutting off state funds to counties that don’t comply with gun control measures that might pass in the state.

“And ultimately, I’m not the governor, but the governor may have to nationalize the National Guard to enforce the law,” McEachin told the Washington Examiner. “That’s his call, because I don’t know how serious these counties are and how severe the violations of law will be. But that’s obviously an option he has.”

“I’m hoping that was said off the cuff and without too much thought of the impact a statement like that would have on our citizens,” he said. “It’s definitely the wrong direction to go with the conversation.”

The Virginia National Guard responded with a string of Twitter posts, in which they said they haven’t received any requests from the governor.

“We understand and respect the passion people feel for the U.S. Constitution and 2nd Amendment rights,” Maj. Gen. Timothy P. Williams, the Adjutant General of Virginia, wrote. “We will not speculate about the possible use of the Virginia National Guard.

“We have not received any requests from the Governor, or anyone on his staff, about serving in a law enforcement role related to any proposed legislation,” he said.

Williams added that personnel “are free to express their opinions to their elected officials, but they should not engage in any political activity while in a uniformed status.”