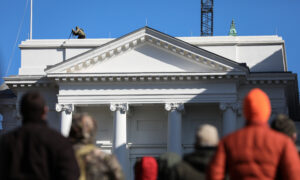 Virginia Sheriff Explains Why He Will Not Support Gun Grab, and Stands by the Second Amendment

Virginia has become a legal battleground over the second amendment, as officials attempt to push stronger Gun Control laws, and as locals have come out in mass protest against any infringement of the Second Amendment.

In this episode of Crossroads we speak with Scott Jenkins, Sheriff of Culpeper County, Virginia, who explains his decision to stand by the protesters against the gun control laws, the punishment his deputies have faced by local politicians because of his stance, and why he has stood by his stance.