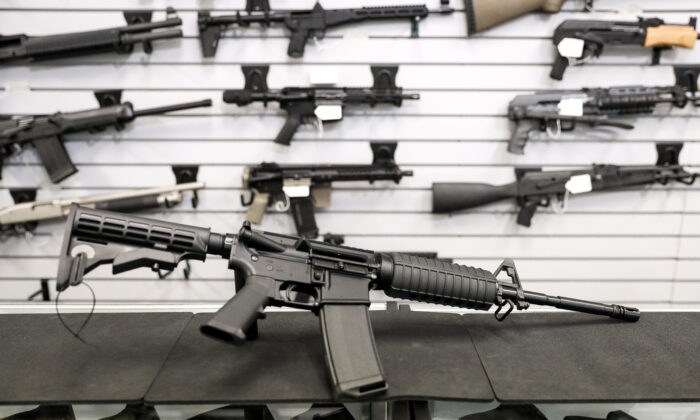 A controversial bill that would have banned Virginians from selling so-called assault weapons and owning high-capacity magazines was defeated by lawmakers after a handful of Democrats rejected the proposal.

State senators in the Judiciary Committee voted to shelve the bill (House Bill 961) until next year and asked the state crime commission to study the issue. Four Democratic senators—Creigh Deeds, John Edwards, Chap Petersen, and Scott Surovell—broke with their party and joined Republicans to reject the measure in a 10–5 vote.

The Feb. 17 bipartisan vote sparked cheers in the committee room, which was packed with gun advocates, according to The Associated Press.

Gun rights groups and Second Amendment advocates told The Epoch Times they were encouraged by the recent outcome but warned the measure could still be brought up again by Virginia Gov. Ralph Northam, who had made the weapons ban and other gun control measures one of his top priorities.

The legislation, dubbed HB 961, expands the definition of “assault firearm” and “prohibits any person from importing, selling, transferring, manufacturing, purchasing, or transporting an assault firearm.” It defines an assault firearm as “a semi-automatic center-fire rifle that expels single or multiple projectiles by the action of an explosion of combustible material with a fixed magazine capacity in excess of 12 rounds,” among other things.

The original bill would have banned the ownership of all “assault weapons,” but an amendment would change it to only ban sales and transfers of assault firearms. The bill made clear that any Virginian who already owned a so-called assault firearm by July 1, 2020, would have been able to keep it.

“While this is a victory for gun owners in the Commonwealth, we still have to be ever vigilant,” Crump said via email. “The bill can still be brought back by Governor Northam. Gun owners need to stay engaged and, most importantly, vote. This is just one step toward taking back our state.”

About a dozen other gun control bills have advanced swiftly through Virginia’s state legislature in recent weeks and could be passed in coming days. Those bills include limiting handgun purchases to one per month, universal background checks on gun purchases, allowing localities to ban guns in public buildings, parks, and other areas, and a “red flag” bill that would allow authorities to temporarily take guns away from anyone deemed to be dangerous to themselves or others.

Mark Oliva, the director of public affairs at the National Shooting Sports Foundation, called the recent vote a step in the right direction. He said the foundation is confident the state’s crime commission will come back with no recommendations.

“We are encouraged by the bipartisan vote to table this unconstitutional gun grab that would have denied millions of Virginians of their Second Amendment rights and made criminals of law-abiding citizens,” he told The Epoch Times.

A spokesperson for Northam told The Epoch Times that while the governor is “disappointed in today’s vote,” he expects the Crime Commission “to give this measure the detailed review that Senators called for.”

“We will be back next year,” press secretary Alena Yarmosky said via email. “Despite today’s vote, the Governor is proud of the several common-sense gun safety measures that continue to advance. These bills represent historic steps forward in keeping Virginians safe from gun violence. Make no mistake—they will save lives.”

Dudley Brown, president of the National Association for Gun Rights, told The Epoch Times that they “have to keep up the pressure,” and that the weapons ban was just one of many gun control bills that Northam wants to pass.

“A show of force from our members and other gun rights activists across Virginia made this happen,” he said via email.

All of the proposed bills will have to be approved by both the House and Senate before being signed by Northam to become law.

NRA spokesperson Catherine Mortensen called the vote a “victory for honest, hard-working Virginians who shared their support for the Second Amendment.”

“We thank the senators on the Judiciary Committee for listening to their constituents and delivering a bipartisan defeat of an egregious gun ban that would have criminalized law-abiding gun owners,” she told The Epoch Times in an email.