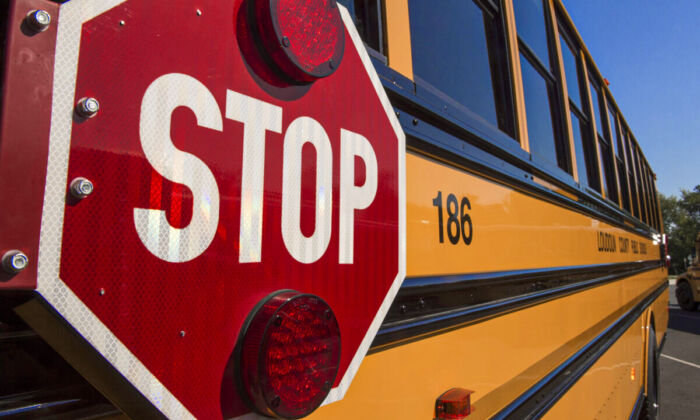 A school bus is seen during a safety event for children at Trailside Middle School, in Ashburn, Va., on Aug. 25, 2015. (Paul J. Richards/AFP via Getty Images)
Education & Family News

Some students in Virginia have been isolated from their mask-wearing peers after their parents sent them back to school without a mask per Gov. Glenn Youngkin’s executive order, reports say.

Jan. 24 marks the first day that Youngkin’s order took effect. Signed hours after the Republican governor assumed office, the order allows parents to “elect for their children not to be subject to any mask mandate in effect at the child’s school or educational program.”

When some students arrived at school on Monday morning without a mask on, however, they were reportedly barred by school officials from joining other students who remain masked.

In an interview with Virginia radio station WMAL-FM, Megan Rafalski of Loudoun County sobbed as she described the way her son was treated.

“It’s unbelievable what they’re doing to our kids,” Rafalski said. “They won’t let my son go to his classroom, because he won’t wear a mask, because he’s exercising his right. And they’re forcing him to sit in the office. He’s been strong armed, intimidated by his principal and many others.”

Rafalski’s son was not the only one forced to stay away from the rest of the students. Rafalski noted that her son has “a lot of friends” who were “sticking together to stand up for their rights.”

In a statement put out on Monday, Loudoun County Public Schools said that staff will meet with students who refuse to wear masks and contact their parents to “discuss and identify the reason the student will not comply.” Yet Rafalski said when she and other parents tried to go inside the school building to talk to school officials, they were told to stay outside in the freezing cold.

“All we want is for our kids to be able to go to class with their peers and have fun, smile and learn,” Rafalski said. “We’ve waited so long, we were so hopeful and our kids were so hopeful to go to school on Monday and not be treated this way.”

The incident comes as seven Virginia school districts, which collectively serve a total of over 350,000 students across the state, announced that they are suing to block Youngkin’s order.

“This legal action centers on fundamental questions about … whether an executive order can unilaterally override that constitutional authority,” the school boards said in a joint press release.

When asked Monday about the lawsuit, White House press secretary Jen Psaki spoke in favor of the suing districts, saying that they should be allowed to follow public health officials when it comes to decisions like mask mandates.

“The President believes that public health officials have the best guidance on what we can all do to protect ourselves, including teachers, administrators, and students,” Psaki said at a press conference.