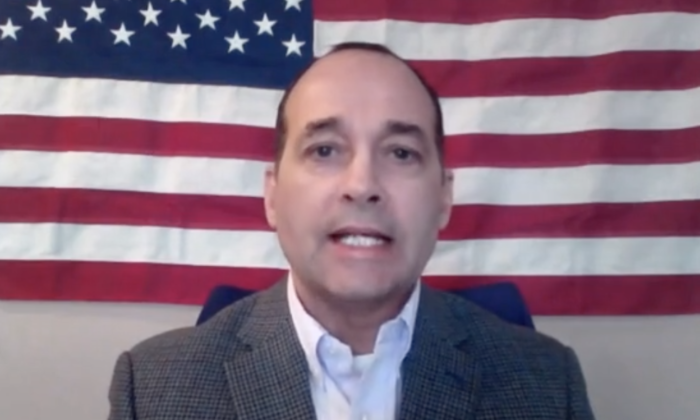 Rep. Bob Good (R-Va.) says his colleagues have a bill that would outlaw the teaching of the controversial critical race theory (CRT) in their state.

“We have a bill, as you know, that we’ve introduced that says that the teaching of critical race theory, or the kind of teachings that would separate kids or discriminate kids based on race, is a violation of their civil rights,” Good told Steve Lance on NTD’s “Capitol Report” on Jan. 28. “And certainly, to treat people differently based on race is a violation of civil rights.”

Republican Governor Glenn Youngkin took office on Jan. 15 and issued an executive order to end the use of “divisive” curriculum like CRT.

“Inherently divisive concepts, like Critical Race Theory and its progeny, instruct students to only view life through the lens of race and presumes that some students are consciously or unconsciously racist, sexist, or oppressive, and that other students are victims,” states Youngkin’s executive order.

Since the summer of 2020, Virginia parents have been speaking out against the injection of critical race theory (CRT) into the public school system, an ongoing battle that has drawn national headlines. Parents from across the country have protested CRT, a quasi-Marxist analytical framework, on the grounds that it classifies children as “oppressors” or “oppressed” on the basis of their skin color.

“And so, I’m proud that he’s standing up against critical race theory,” Good said. “As you know, that is a dangerous ideology that indoctrinates our kids with a leftist racist mindset, and it tries to frame dishonestly who we are as a country. It’s dishonest about the progress that we’ve made and it’s dishonest about [its claim that] kids are limited or advantaged based on their race.”

Meanwhile, Virginia Democrats say CRT promotes “inclusion” and “equity,” making each child feel seen and heard, and that parents do not have the right to tell school leaders what to teach.

“Senate Democrats and Virginians trust our teachers—plain and simple,” Virginia Senate Democrat Majority Leader Dick Saslaw said in a Jan. 26 press statement. “Parents are always a part of the conversation with their local and state elected officials. … and Virginia Republicans’ unconstitutional executive orders and draconian legislation would only hurt our students, not help them learn.”

Virginia’s Democrat Caucus Chair Mamie Locke said, “Forcing educators to submit to parental approval of every lesson, every assignment is backward and burdensome.”

But Good says that parents should have the final say in what is taught to their children, adding that he and his fellow Republicans also support Youngkin’s decision to set up a hotline Virginians can call to report CRT being used in their school.

“And of course, the left in the media going crazy over him doing this, but, parents and kids, obviously, are on the frontline, and parents supporting them are the ones who know what’s happening in the schools. And they’re the ones who need to report, frankly, violations of the policies of the new administration.”