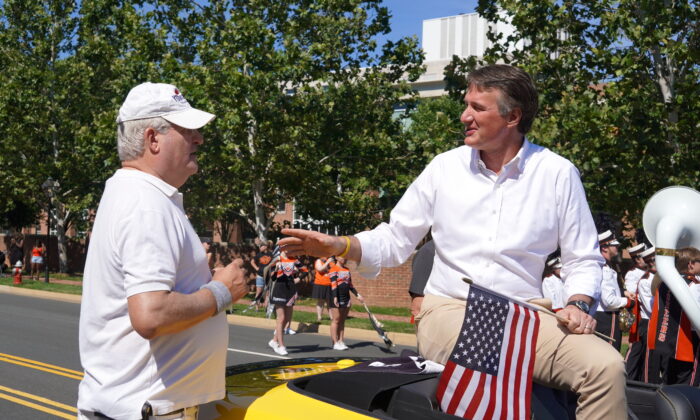 FAIRFAX COUNTY, Va.—At the annual Independence Day parade in Fairfax, Virginia, thousands of participants and spectators enjoyed the event though the weight of inflation was in the air, something different than in 2021. Many politicians, including Virginia Gov. Glenn Youngkin, also joined the parade.

When asked about speculation regarding his potential White House bid in 2024, Youngkin said that he was focusing on Virginia for now. “I’m always honored when people are suggesting that. I’ve got my eyes on Virginia right now,” he told The Epoch Times. “We’ve got a lot to do. Inflation is running away from us.”

“One of the most exciting things that we are seeing across the Commonwealth of Virginia is a recognition that we can be the best,” Youngkin said about the changes in Virginia since he took office in January. “We’ve seen Boeing and Raytheon move here, Lego move here.”

In May and June, defense contractors Boeing and Raytheon announced they would move their global headquarters to northern Virginia. And the Denmark-based Lego Group said in June that it would build its first U.S. manufacturing facility south of Richmond.

Youngkin added: “80,000 jobs in three months—it’s really been exciting, and Virginia is on the move.” Creating jobs was one of the top campaign promises he made to Virginians.

In June, he signed the state’s two-year budget with $4 billion in tax cuts in the form of one-time rebates of $250 for individual taxpayers and $500 for couples. The budget also included eliminating the 1.5 percent state portion of the grocery tax.

Congressional Race in the District

Youngkin was not the only politician joining the annual Independence Day parade in Fairfax. Many local leaders and the district’s two congressional candidates were also present. The 11th Congressional District includes most of Fairfax County, the City of Fairfax—the seat of the County and where the parade took place—and eastern Prince Williams County.

“I’d like to believe I still have the support. But I have got to run every election like the devil’s at my heels,” Connolly told The Epoch Times. He said he had been “a big part” of growing the community to “one of the most enviable communities in America.” After being unopposed in 2016, Connolly won over 70 percent of the votes in 2018 and 2020.

His opponent Myles wanted to offer himself up as the alternative. “Vote for me, and we’ll stop this Biden-Pelosi-Connolly inflation because it’s just eating away our pocketbooks, in our grocery shopping, in our gas,” he told The Epoch Times. “Our quality of life is really being hurt.”

Inflation Is the Biggest Concern

Kfir Cohen, a Fairfax County resident since 2009, said inflation was his biggest concern. About a month and a half ago, he noticed prices had gone up by 30 percent. “I usually buy the same things every time. It’s a 30 percent increase in the cost of the same items, exactly 30 percent,” he told The Epoch Times.

“It’s very difficult to maintain a household, especially in this area,” he said. Fairfax County is one of the wealthiest counties in the United States and has one of the highest living costs in the D.C. metropolitan area.

Congressman Gerry Connolly has been the incumbent since Cohen moved here. “I don’t think [Connolly] is working hard enough to represent [the district] because he doesn’t have a competition,” Cohen said. “Every time, he wins automatically, which is not so good.” Therefore, he was open to electing a Republican for change.

Identifying as an Independent, Cohen said he would pick a congressional candidate that better addresses his top two concerns: inflation and school safety. Having a 17-year-old daughter and a 14-year-old son, both in the Fairfax County Public Schools, Cohen said he didn’t want a mass shooting in schools in his area.

Allyson Grimet said she would support Connolly again. “Education and our kids growing up in a safe environment, safe world,” she told The Epoch Times about her top issue. To her, inflation is “not okay,” but it won’t take away her support for him.

Vanessa, a Myles supporter who didn’t want to disclose her last name, said gas, groceries, and COVID vaccine mandates were the top three reasons for voting for a Republican in the district. Filling up her 23-gallon tank recently cost her $120.

“Gas is ridiculous,” she said. “I feel like the Democrats want us to suffer so that we will buy an electric car. And right now, with inflation, I can’t afford to switch over to an electric vehicle.”