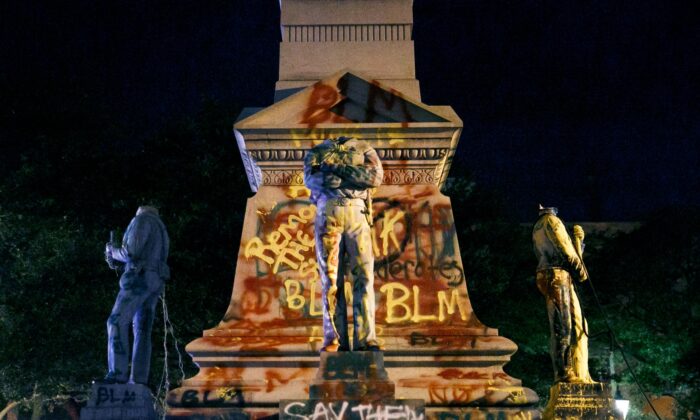 The statues on the Confederate monument are covered in graffiti and beheaded after a protest in Portsmouth, Va., on June 10, 2020. (Kristen Zeis/The Virginian-Pilot via AP)
US News

A Virginia police chief who charged a Democratic state senator and several black community leaders with conspiring to damage a Confederate monument said Monday that she was fired.

Portsmouth Police Chief Angela Greene announced her removal at a press conference outside City Hall, broadcast by WAVY-TV. She said she has received a termination letter, and that she is planning to file a wrongful termination lawsuit against the city.

“I believe I was wrongfully terminated for upholding the law,” she told the reporters. “[I’m] being retaliated against for sticking to my sworn oath, that I swore to serve and protect my citizens, community, and keeping my officers safe.”

Greene’s termination came three months after her department brought felony charges against Democratic state Sen. Louise Lucas and several other prominent members of Portsmouth’s black community in connection to the toppling of a 127-year-old Confederate monument.

On June 10, protesters in Portsmouth spray-painted the monument, before they decapitated and eventually broke it apart. A protester named Chris Green, who didn’t participate in the destruction of the statue, was seriously injured when part of the statue fell on him.

Since then, a team of detectives and supervisors began to compile all written, audio, and video evidence surrounding the circumstances that led to the monument’s vandalism and Green’s injury, according to an August 17 statement from Greene. The team identified a total of 13 individuals involving the incident, including Lucas, and Portsmouth School Board member LaKeesha S. “Klu” Atkinson, and members of the local chapter of NAACP.

A police officer’s body camera footage showed 76-year-old Lucas was at the scene on June 10, hours before the demonstration at the monument started. She appeared to be telling police that the protesters were going to paint the statue, and that they should not intervene.

“Ma’am, you can’t tell them to do that,” one police officer said to Lucas.

“I’m Senator Louise Lucas,” she told the officers. “I know I’m in disguise, but they are going to put some paint on this thing. You can not arrest them. You need to call Dr. Patton, because they are going to do it. You can’t stop them. This is city property.”

The statue of Portsmouth was one of many Confederate monuments vandalized or toppled by protesters in Virginia following the death of George Floyd, which sparked protests and riots across the country.