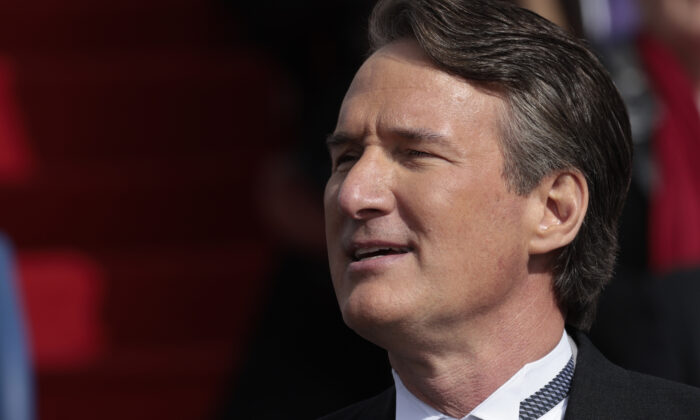 The law, Senate Bill 1303, says that school boards must offer in-person instruction in a manner that adheres to mitigation strategies to curb the transmission of COVID-19 as outlined by the Centers for Disease Control and Prevention, or CDC.

Plaintiffs also say Youngkin’s order runs afoul of the Virginia Constitution, which says that supervision of schools is vested in school boards.

“Nowhere in Article VIII of the Constitution of Virginia is the Governor of Virginia vested with the type of authority that would be required to lawfully enact Executive Order Number Two and impose the requirements stated therein,” they wrote.

They are asking the court to declare the order unenforceable before it takes effect on Jan. 24.

“We will continue to protect parents’ fundamental right to make decisions with regard to their child’s upbringing, education, and care,” Macaulay Porter, spokesperson for Youngkin told The Epoch Times in an email.

Some lawmakers don’t agree with the arguments outlined in the suit.

State Sen. Siobhan Dunnavant, a Republican and one of the sponsors of Senate Bill 1303, said in a statement this week that “the risk of COVID-19 to children does not justify the universal need for masks in school, nor does SB1303 mandate the use of masks.”

“It is time for our governing bodies, including school boards, to develop achievable ‘off-ramps’ for the Covid-19 protocols, based on sound scientific principles. The default option should always be normalcy for our children unless there is evidence or metrics to back up the protocol,” Dunnavant said.

Multiple districts have already signaled they will not comply with Youngkin’s order.

“Arlington Public Schools will continue to require all staff and students to wear masks inside on school grounds and on buses, as part of our layered approach to safety,” the school system said in a statement.

Others, though, rescinded mandates ahead of the order’s deadline.

Youngkin, a Republican, was elected in part because of his stances on schools, including opposing the teaching of critical race theory and protecting parents’ ability to make key decisions for their children.