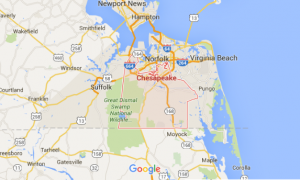 Cameron Dooley killed his 22-year-old brother Landon, his 17-year-old sister Brooke, and his parents Steven Todd and Lori Dooley, police said in an update on the situation.

The murders started at the house Landon, Brooke, and their parents shared. Cameron then went to his grandmother’s home and killed her.

Steven Todd was a police officer in Chesapeake but had recently retired after 25 years of service and started working as a repair technician at a Dive Center.

“He was the kind of guy with like a little grin under his big beard smile, but you could see it,” said Lindsey Hillier-Hotchkiss, a co-worker of Todd’s. “He always had it every day no matter what.”

Doris lived in Brentwood, and Cameron had moved in recently to help take care of her as her health declined, said Desiree Darst, a neighbor of Steven Todd and Lori’s.

“That’s how we know him,” Darst told the Virginian Pilot. “He’d stop by and talk. He’d come in and chit-chat.”

The parents’ and grandmother’s houses are about a block away.

Police aren’t sure of a motive yet.

Because of the different ages of the victims, multiple generations have been hit hard by the deaths.

Brooke was a student at Deep Creek High School, with many fellow students grieving for her. She was on the cheer squad.

One person tweeted that the “tears are just flowing” Thursday at Deep Creek High, and that there is a just an overwhelming sense of sadness.

A candlelight vigil is scheduled for the family at Temple Baptist Church on Saturday, January 30 at 5 p.m., followed by a prayer service.