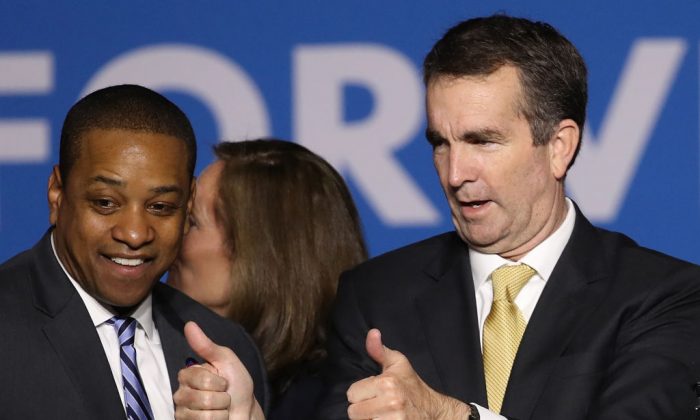 Virginia Lt. Governor Justin Fairfax, a Democrat, vigorously denied allegations of sexual assault on Feb. 4 as Gov. Ralph Northam met with his cabinet amid mounting calls for Northam to resign over a racist yearbook photo.

In a lengthy statement, Fairfax—who is next in line to be governor if Northam, also a Democrat, decides to resign—hit back at the allegation that he sexually assaulted a woman at a 2004 Democratic National Convention.

“Lt. Governor Fairfax has an outstanding and well-earned reputation for treating people with dignity and respect,” a Feb. 4 statement from his office said. “He has never assaulted anyone—ever—in any way, shape, or form.”

His office also warned they will take “appropriate legal action” for those attempting to spread what they described as a “defamatory and false allegation.”

The allegation against Fairfax, first reported by political blog Big League Politics, claimed that Vanessa Tyson, a professor at Scripps College and a fellow at Stanford University, was assaulted 13 years ago at the Democratic convention in Boston. Her allegation was made known to the blog through a tipster sharing a screenshot of a private post from Tyson.

“Imagine you were sexually assaulted during the DNC Convention in Boston in 2004 by a campaign staffer,” Tyson wrote in the message that was forwarded. “You spend the next 13 years trying to forget it ever happened. Until one day, you find out he’s the Democratic candidate for statewide office in a state some 3,000 miles away, and he wins that election in November 2017. Then, by strange, horrible luck, it seems increasingly likely that he’ll get a VERY BIG promotion.”

Although Tyson didn’t mention the lieutenant governor by name, it became obvious after Fairfax responded to the allegations. In his statement, Fairfax said the accuser went to the Washington Post with her story before he was inaugurated in 2018, but he claimed the paper found little evidence corroborating the allegation, so they decided not to publish the story.

“Tellingly, not one other reputable media outlet has seen fit to air this false claim. Only now, at a time of intense media attention surrounding Virginia politics, has this false claim been raised again,” the statement from his office reads.

But the Washington Post, meanwhile, denied the claims by Fairfax’s office.

“The Post did not find ‘significant red flags and inconsistencies within the allegations,’ as the Fairfax statement incorrectly said,” the Washington Post said in a Feb. 4 story.

In the meantime, the embattled Northam has been mulling his next move amid mounting calls for his resignation from fellow Democrats.

Dozens of protestors gathered at the state capitol in Richmond on Feb. 4 demanding for Northam to step down after a photo from his yearbook was released, showing one person in blackface standing next to a masked person in Ku Klux Klan robes. Northam’s office didn’t immediately respond to a request for comment.

Following the release of the photos, Northam apologized on Feb. 1, admitting he was one of the two before changing his story the next day, claiming he wasn’t in the photo. In his new claims, he said that he was in blackface at another time in that year during the 1980s to portray singer Michael Jackson in a dance competition.

“These images arouse centuries of anger, anguish, and racist violence and they’ve eroded all confidence in Gov. Northam’s ability to lead,” Booker said in a statement posted on Twitter. “We should expect more from our elected officials. He should resign.”

These images arouse centuries of anger, anguish, and racist violence and they’ve eroded all confidence in Gov. Northam’s ability to lead. We should expect more from our elected officials. He should resign.

“It doesn’t matter if he is a Republican or a Democrat. This behavior was racist and unconscionable. Governor Northam should resign,” added Castro.

Kellyanne Conway, counselor to President Donald Trump, told reporters on Feb. 4 that it’s “confounding to many people, it turns out, that the sitting governor… is still there despite the calls from many leaders.”

Conway also brought up Northam’s comments last week about abortion, when he appeared to say that killing children after they were born could be an option under a new bill that Democrats were trying to pass in the state. Trump on Twitter described Northam’s yearbook photo and comments on abortion as “unforgivable.”

Democrat Governor Ralph Northam of Virginia just stated, “I believe that I am not either of the people in that photo.” This was 24 hours after apologizing for appearing in the picture and after making the most horrible statement on “super” late term abortion. Unforgivable!