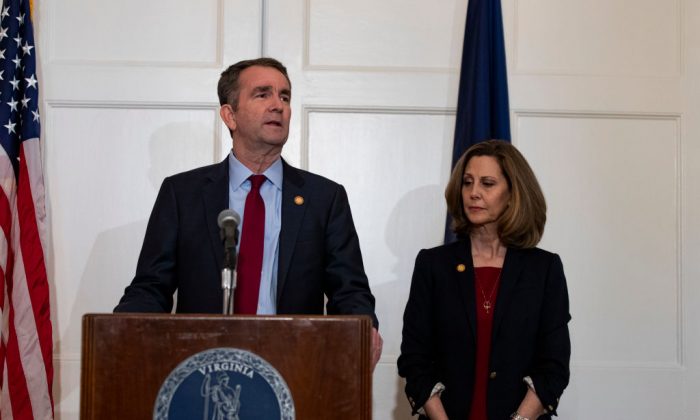 Virginia Governor Ralph Northam, flanked by his wife Pam, speaks with reporters at a press conference at the Governor's mansion in Richmond, Virginia, on Feb. 2, 2019. (Alex Edelman/Getty Images)
Politics

Embattled Virginia Governor Ralph Northam said the state’s lieutenant governor should resign if the allegations of sexual assault surrounding him turn out to be true. Northam, in the meantime, repeatedly insisted that he would not resign over his own controversy relating to a racist yearbook photo that recently surfaced.

Speaking to “CBS This Morning” in an interview to be broadcast on Feb. 11, Northam said he had considered resigning in the wake of the political fallout but said he had learned from the controversy. The photo from his yearbook showed one person in blackface standing next to a masked person in Ku Klux Klan robes.

“Virginia also needs someone who is strong, who has empathy, who has courage and who has a moral compass,” Northam told co-host Gayle King. “And that’s why I’m not going anywhere.”

Following the release of the photos, the Democrat apologized on Feb. 1, admitting he was one of the two before changing his story the next day, claiming he wasn’t in the photo. In his new claims, he said that he was in blackface at another time to portray singer Michael Jackson in a dance competition.

When asked about the allegations of sexual assault, including rape, from two women against fellow Democrat Lieutenant Governor Justin Fairfax, Northam said that he should step down depending on the evidence.

“If these accusations are determined to be true, I don’t think he’s going to have any other option but to resign,” he said.

Northam also said he supports Fairfax’s own requests for an investigation from the FBI into the allegations. Fairfax has denied all accusations and is facing calls from his own party to step down as the state’s second-highest elected official.

In an updated Feb. 9 statement, Fairfax claimed that his encounters with both women were consensual. If Northam decides to resign, Fairfax would be next in line as governor.

“I believe and trust that due process will provide the fairness, justice and honesty that is necessary,” Fairfax said.

Meanwhile state House member Patrick Hope, also a Democrat, said he would introduce articles of impeachment against Fairfax on Feb. 11 unless the lieutenant governor steps aside.

The second-in-line to succeed Northam, Attorney General Mark Herring, also admitted that he had once blackened his face to imitate an African-American performer.