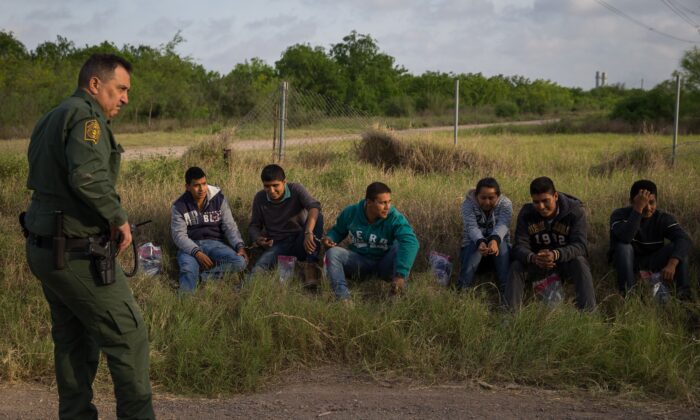 A Border Patrol agent apprehends illegal immigrants shortly after they crossed the border from Mexico into the United States in the Rio Grande Valley Sector near McAllen, Texas, on March 26, 2018. (Loren Elliott/AFP via Getty Images)
By Katabella Roberts

SB 34, introduced by Democratic state Sen. Scott Surovell, passed the state House of Delegates on March 7. The bill enables thousands of the roughly 300,000 illegal aliens living in the state to obtain driver privilege cards but not full-fledged licenses.

Previously, illegal aliens were unable to get a driver’s license, leading many to break the law and drive illegally without one. Surovell already said the privilege cards were a way to allow “individuals that want to work and support their families to do,” and having a vehicle to get around Virginia was a necessity.

“Having identification also makes it more likely that individuals will come forward to assist law enforcement in an investigation. Other states who have taken action have seen a decline in collisions and hit-and-run cases. This is a public safety and quality-of-life bill,” he said in a statement.

Under the new law, illegal aliens must file a tax return or be listed as a dependent on a tax return to be eligible for the driver’s privilege card. Unlike a standard driver’s license, privilege cards must be renewed annually. The privilege cards will also explicitly state that they are not to be used as ID for voting in elections or to obtain federal benefits.

Republicans in Virginia opposing the bill reacted to its passage over the weekend, with John March, a spokesman for the Virginia GOP saying that Democrats had failed to work “on behalf of their constituents.”

“Instead of working on behalf of their constituents, Democrats chose to work on behalf of illegal immigrants,” March said in a statement to The Daily Caller News Foundation.

“I’m not sure that the farmer without access to broadband or the single mother struggling to make ends meet will be too happy about this, but who knows. Democrats have shown where their priorities are, and they aren’t with Virginians,” March stated.

Matthew Tragesser, a spokesperson for the Federation for American Immigration Reform (FAIR), also told the outlet that giving “any form of driving privileges to illegal aliens not only undermines public safety but national security as well.”

“If the State of Virginia truly wanted to improve public safety with unlicensed drivers, the state would discourage them from driving in the first place and not lower driving qualifications,” Tragesser stated. “State and local governments should be on the side of enforcing our immigration laws, not undermining them.”

If signed into law, the legislation would make Virginia the 18th state, including Washington D.C. and Puerto Rico, to allow undocumented immigrants to obtain driver privilege cards.

In December 2019, New York passed the “Green Light Law,” which allows illegal aliens to apply for and obtain a driver’s license from the Department of Motor Vehicles (DMV) and also withholds all DMV data from immigration agencies.

Opponents, including county clerks, argue that the law may create loopholes for criminals to obtain a driver’s license and use it to commit bank fraud, identity theft, credit card fraud, human trafficking, and other criminal activities.

Law enforcement members, including sheriffs and deputies in the state, have also expressed concerns that they might inadvertently share information that originates from the DMV, leaving them vulnerable to lawsuits.