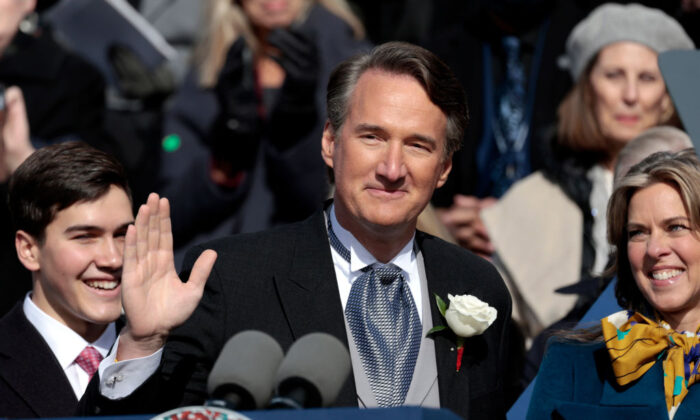 Glenn Youngkin is sworn in as the 74th governor of Virginia on the steps of the State Capitol in Richmond, Va., on Jan. 15, 2022. (Anna Moneymaker/Getty Images)
Critical Race Theory

Virginia’s Education Department has released a 30-day report on its actions to rescind programs, policies, and materials involving “discriminatory and divisive concepts” such as critical race theory (CRT).

“The concepts have become widespread in the Virginia Department of Education (VDOE) and in Virginia school divisions and we will need to proactively review policies, practices, and pedagogies around the state to uphold the Civil Rights Act and comport with Executive Order One,” the report (pdf) reads, referring to Gov. Glenn Youngkin’s executive order to address “inherently divisive concepts” in public education.

The report lists eight steps that the Youngkin administration has taken or is taking to identify and address “inherently divisive concepts” in public education. The majority of those actions concerned EdEquityVA, a program established in 2021 by then-Gov. Ralph Northam with the goal of establishing “concrete plans to dismantle any and all forms of systemic racism in Virginia’s public education system utilizing the principles of anti-racism.”

According to the report, numerous resources within EdEquityVA employ the concept that past discrimination needs to be addressed with new discrimination, maintaining that people should be treated differently based on their skin color.

For example, the program’s suggested that reading lists include pro-CRT authors such as Ibram X. Kendi, whose 2019 book “How to Be an Antiracist” states that “the only remedy to past discrimination is present discrimination.”

The report also notes that under EdEquityVA, the term “equity” is redefined to mean that any difference in what students have or what they achieve is automatically a result of supposed “systemic racism.” In an effort to make K–12 math education more equitable, the Northam administration proposed a widely criticized plan that would have limited student access to advanced math courses.

The VDOE has rescinded all EdEquityVA resources. It’s also removing resources promoting “cultural competence”—the idea that teachers should “redress bias” and focus on “academic equity of outcomes,” as opposed to equal opportunity for all students—from its website.

In January, the Youngkin administration launched an email tip line for parents to report public school teachers that they believe to be engaging in divisive practices, such as promoting CRT concepts.

“We’re asking for folks to send us reports and observations that they have that will help us be aware of things like privilege bingo, be aware of their child being denied their rights that parents have in Virginia, and we’re going to make sure we catalog it all,” Youngkin told conservative radio host John Fredericks on Jan. 24.